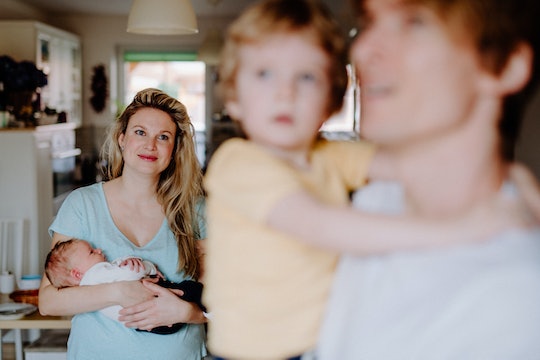 For some it was a bolt of lightning, and for others it took a steady erosion of doubt — the realization the person they were dating was "the one" who'd end up being the parent to their future (or current) children came fast and slow for the 10 moms Romper spoke to.

Like Emily, who met her husband at age 18 but didn't know he was "the one" until 10 years later. Or Laurel, who was adamant about never having children, but realized she could raise an offspring or two with her future husband after he took care of her during a bad case of the flu.

There was never a moment when I knew I was going to start a family with the man who became my husband. But from day one, there was very much a sense of, "If things go as well as they seem to be going I am for sure going to marry this dude." And — great news! — they did, so I did, and now —more than a decade and two kids later — things continue to go pretty well. He's an incredible partner and father; as good as he always seemed that he could be.

Here's how other moms decided they'd landed on the right person: