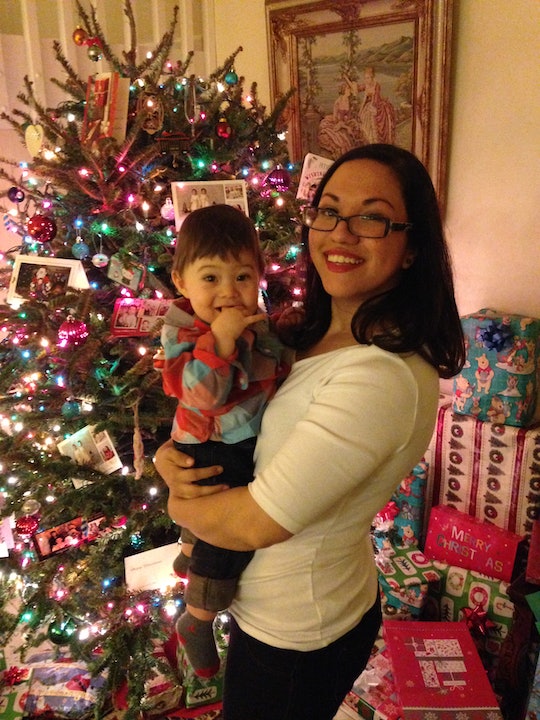 This Year, My Son Needs Our Latinx Holiday Traditions More Than Ever

Like many people, I get incredibly nostalgic around the holiday season. For me, the time between Halloween and the New Year has always been about family. Growing up, I remember decorating the house with my mom, putting up lights with my dad, and going to numerous family parties for events like La Purisima and Noche Buena. Yes, as a young Latin American my traditions were more involved than simply baking cookies for Santa. And now that I'm a mother, I know I need to pass on my Latinx traditions to my son, especially as he is half-Latinx and living away from all our Latinx family.

My Latinidad (meaning the various attributes shared by Latin American people and their descendants) wasn’t always something I celebrated. I grew up in Miami, Florida, surrounded by thousands of other Latinx people, much like myself. I had friends who were born in Cuba, friends whose parents came from Colombia and Venezuela, friends from Nicaragua whose first language was Spanish, and friends from all over Latin America. As a result, it didn’t really occur to me that I was somehow different.

As a child I recognized some prevailing racist beliefs held and perpetuated by Latinx people (especially against darker-skinned, more indigenous-looking Latinx individuals), but we were all still Latinx. I didn’t know that in other places in this country people were making sweeping judgements about our legal status, our language, our education level, our manners, and our traditions.

As I’ve gotten older, I’ve encountered some narrow-minded views from non-Latinx people about who I am and who my people are. This has mostly happened as I’ve traveled more and lived outside my South Florida, Latinx enclave. And in the past year, with the election of Donald Trump, it’s been hurtful to see just how hateful some people still manage to be. From discrimination and violence against people of color for simply existing, to the onslaught of xenophobia against the undocumented Latinxs who live in fear of deportation for simply coming to this country and attempting to build a better life for themselves and their families, it pains me to see how poorly my people can be treated. This is one of many reasons I feel even more compelled to share my Latinidad with my family, especially around the holidays.

As I’ve gotten older, I’ve encountered some narrow-minded views from non-Latinx people about who I am and who my people are.

I already started my Latinx holiday kick-off by introducing my son to Dia de los Muertos earlier this month. While I did not grow up with the tradition myself (my Mexican-born father was raised in Nicaragua not far from my Nicaraguan mother), I am making an effort to further explore my half-Mexican roots. So this year we talked about Dia de los Muertos and about the traditions involved. Next year, when my son is older, I plan to continue this tradition by building altars and talking more openly, honestly, and reverently about our dearly departed.

While Thanksgiving isn’t a Latinx tradition, it was still a holiday I always celebrated with extended family. The best way for me to incorporate Latinidad into it is, of course, through food. My Mama Adilia (who was my paternal grandmother) made a killer ensalada de papa (potato salad) the likes of which I’ve neer seen or enjoyed anywhere else. In the past, I’ve recreated this dish for my family, to everyone's enjoyment. And then there’s other staples, like arroz y frijoles (rice and beans), which are undoubtedly a necessity at any Latin holiday table.

I didn’t know that in other places in this country people were making sweeping judgements about our legal status, our language, our education level, our manners, and our traditions.

Then comes December, which was always kicked off with the double-whammy of La Griteria and La Purisima. These are Nicaraguan-specific celebrations, both usually held on Dec. 7 (though some folks will celebrate Purisimas on other days, too). These celebrations hold a special place in my heart. Not only where they noteworthy for my family, but they were also a staple of my Nicaraguan identity. These celebrations are heavily Catholic and revolve around the Virgin Mary, but I like to think of them as the Nicaraguan Halloween, sans the costumes. People go from house to house, from altar to altar, singing the praises of La Virgen. In exchange, hosts will pass out treats to all, ranging from small wooden toys and sugar cane to traditional drinks and fresh fruit. It was around this time that we’d put up our Christmas tree (listening to a mix of American holiday music and Spanish-language favorites, like Mi Burrito Sabanero).

And, of course, there’s Christmas. Even though I am more of an agnostic atheist these days, I can’t help but still have an attachment to the holiday. I have fond memories of setting out the nativity with my mom (hiding the baby Jesus until midnight on Christmas), and buying up poinsettias for the household. And then there was the main festivity: Noche Buena. While it's customary for Americans to hold a Christmas dinner on Christmas day, many Latinx families start the celebration the night before Christmas via Noche Buena. This is always meant to be a big party, with tons of food and plenty of dancing. Salsa, merengue, villancios... you’d hear nothing but Spanish-language tunes throughout this celebratory evening. My mother would often make gallina (hen), as this is her mother’s tradition, and a particularly incredible stuffing that is unlike anything I’ve ever eaten in this country. Sometimes, nacatamales (Nicaraguan-style steamed corn cakes) would be served. We would stay up partying until midnight, and while I know some Latinx people open all their gifts right away, we always opened one or two and saved the rest for the morning.

While my son is still young and probably won’t make it until midnight, I do plan on trying to party it up with him, serving some traditional Latin foods, and maybe even allowing him to open one gift early (because, hey, why not?).

Mostly, I just want my son to be proud of his heritage. I want him to know where half of his family came from, and how we got here. I want him to understand that while some might see us as lesser, while some may try to bring us down, we are a wonderful and proud people.

Even Latin traditions I can celebrate on New Years Eve, and pass down to my son. The ones I witnessed most growing up were eating 12 grapes at midnight (one for each month of the year), and sweeping the dirt from the house out the front door (“out with the old”). There are others that have always sounded fun but never experienced myself, that I might start to incorporate, too. For example, throwing a bucket of water out of the window for good luck, setting an empty suitcase out or walking with it around your neighborhood (so that you’ll travel lots in the following year), and eating lentils (for prosperity in the new year). Pretty sure my son will have plenty of fun chasing me with my luggage, helping me sweep, and eating lentils and grapes. And as an added bonus, it's all healthy.

More Like This
If Your Kids Love Their Elf, You Don't *Have* To Put Him Away On Christmas
20 Ways To End Your Elf On The Shelf For Good
Real Parents Share What Time They Let Their Kids Rip Into Gifts On Christmas Morning
The 35 Top Toys For 3-Year-Olds