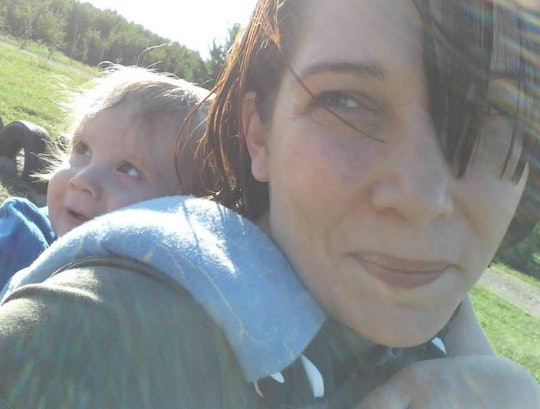 To All The Single Moms On Mother's Day: I See You

I distinctly remember my first Mother's Day as a single mom. If I was asked to describe it in a few words, I would have to say: it was the worst. My kids were too little to know about the holiday, and I was too tired, depressed, and broke to make plans for myself. I called my mom in tears to wish her a happy Mother's Day, then told her how much I hated the holiday. As a former single mom she understood, so when she said, "I've been there" I knew I wasn't alone. So to all the single moms on Mother's Day: I've been there. I see you. You're not alone.

Before I became a single mom it never occurred to me that Mother's Day could be anything other than some jubilant day in which we at least all stop, collectively, and acknowledge the work moms do. I had no idea how much my "single status" was going to change things, or how Mother's Day would really highlight the changes I endured after I left my ex-husband. I had no idea that while I want people around me to be happy, it would be hard to see my married and partnered friends share, upload, and comment on social media posts about their breakfasts in bed, morning mimosas, and relaxing spa days. Because here I was, alone, with my kids climbing all over me and unapologetically demanding my attention. I felt like the worst mom on the planet, I wanted my children to stop touching me, and I wanted to feel seen. Instead, I just felt like an invisible caretaker.

So to the single mom weathering the solo-parenting storm, preparing to deal with a monsoon of social media posts highlighting coupled-up parents and partners going above and beyond for their significant others: you are awesome. You deserve every little gift you see on your social media feed. You are just as important, and loved, and valued as any other mom who is currently on her third brunch mimosa. And while your little ones might be too small to say anything now, they are who they are because of you.

You're it, regardless of what day it is on the calendar.

As a single mom, the one thing I really wanted for Mother's Day was a damn break. Of course, a break was the one thing it felt like I really couldn't have. So instead of being served breastfeed in bed on Mother's Day, I was served a side-order of guilt — for leaving my ex, for wanting time off from my kids, and for choosing single parenthood in the first place. The fear of judgment, shame, and the prevailing stigma surrounding single moms forced me to keep quiet, though. I didn't ask for help, didn't air my grievances, and didn't ask to be even acknowledged on Mother's Day. I guess I thought I simply didn't deserve it.

Other people just don't understand that, as a single parent, you have to be "on" all day, every single day, no matter what or who or when or why. You're it, regardless of what day it is on the calendar. The fact that it's Mother's Day doesn't mean that you get to take the day off or even catch your breath. You don't have a partner to say, "I'll watch the kids so you can get a massage," or even, "Why don't you sleep in for a change?" So, like every other day of the year, you find yourself with too much to do, with not enough time or energy to do it, and while other moms are being praised and showered with gifts and told to take a breather.

It took so much effort to finally get to a place where I could ask for help, and catch a break, but it was worth it.

I wish I could say that people will give single moms all the credit they deserve on Mother's Day, but they probably won't. I grew so accustomed to hearing judgmental comments about my marital status, that I literally teared up a little when the cashier at Target cheerfully said, "Happy Mother's Day." One part of me smiled big, and I managed to say, "thank you so much," but another part of me wanted to sink into the ground, afraid she would notice I wasn't wearing a wedding ring and, as a result, say something rude about me being a single mom.

So single moms, you have got to take care of yourself. In fact, consider this an informal announcement of your upcoming, mandatory break. Because I know how easy it is to let self care take a back seat, especially when you have too much on your plate. But, here's the thing: if you don't take care of yourself, pretty soon you will start to hate being a mom. It took so much effort to finally get to a place where I could ask for help, and catch a break, but it was worth it.

A card or a massage or an expensive brunch can't adequately thank you for all the hard work you do, and one day your children will realize just how much time, effort, and energy you put into caring for them.

I recommend finding ways to make the day special, or at least more bearable. If you can afford it, get a babysitter and take a nap, go for a run, or go to Target by yourself. If your kids are too little to make you breakfast in bed, you can always pick up donuts and "make" it yourself the night before. Remember to hide your favorite on top of the fridge, though, so your kids can't claim it as their own. A spa day can be painting your nails while your kids take a bath, or enjoying a glass of wine after they go to bed. Our Mother's Day might not look like the quintessential festivities we've grown accustomed to, but that doesn't the day — or us — are any less special.

And If no one else tells you on Mother's Day, or any other day: you are simply amazing, single mom. A card or a massage or an expensive brunch can't adequately thank you for all the hard work you do, and one day your children will realize just how much time, effort, and energy you put into caring for them. And on that day, you'll have a million things to post about on Mother's Day, too.