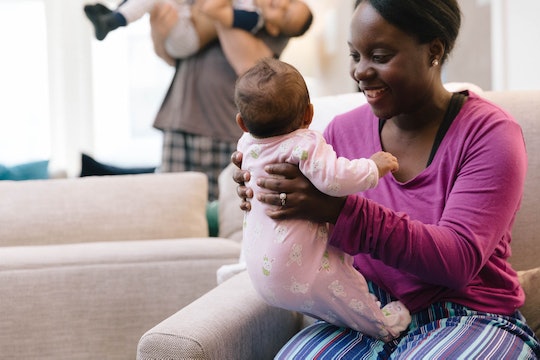 To The Parents Who Say You’ll “Never Use Baby Talk”: Hahahahaha

There is something hardwired into parents that make our voices go up three octaves when we’re talking to babies. My theory is that baby talk will disguise the actual disgust you're feeling thanks to whatever ridiculously gross thing your kid just did. I mean, sure, science proves there are real reasons, many beneficial, as to why parents decide to speak like children around their, you know, children, but I think my hypothesis is a solid one. Either way, whether I was enchanted by my child or shocked at whatever gross thing the kid just got herself into, I couldn’t stop with the baby talk.

As my kids have gotten older, my use of baby talk has diminished. But I am still constantly calibrating my tone with them. It’s so easy to lapse into frustration when they don’t listen, or squabble with each other, and I have to be careful to mitigate that feeling. I’ve learned my kids don’t respond well when my tone reflects my exasperation or my anger. While it might have worked for my mom to occasionally yell — since it galvanized my fear, which motivated me not to mess up — I find that when I'm yelling a lot my kids just tune it out. Speaking calmly, though firmly, is a better approach. And I’m sure if I adopted the baby talk I used to use when they were tiny, it might work even better. But they are 7 and 9 now and that would just be weird. Talking to them in somewhat adult tones helps them keep some dignity when I remind them — for the umpteenth time — to brush their teeth.

But back when they were babies, through their time in preschool, I would disguise the horror I faced with baby talk. They might have grossed me out with their bodily functions and attraction to the gross corners of our world (living in New York City doesn’t help), but they would never have known it by the sound of my voice when I would say these things, poorly mimicking Mariah Carey at the highest pitch I was capable of achieving: