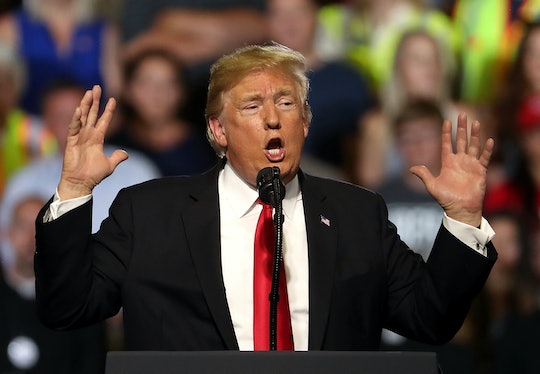 It's almost like clockwork: Anytime President Donald Trump wants to insult Sen. Elizabeth Warren of Massachusetts, he calls her "Pocahontas." Instead of questioning her actions in office, Trump chooses, continually, to zero in on Warren's heritage, using the slur to deride her claim to Native American ancestry. He once again took this jab at the Democratic senator at a recently rally, and in the process, Trump mocked the #MeToo movement, the swelling global campaign against sexual harassment and violence.

Trump lobbed his derogatory attack against Warren on Thursday during a Make America Great Again rally in Great Falls, Montana in support of the state's Republican senate candidate, according to Huffington Post. The president, who has been accused of sexual misconduct by multiple women, set up the insult — and subsequent jab at the #MeToo movement — by suggesting a hypothetical presidential debate with Warren, who is considered a potential Democratic candidate in the 2020 election. In the middle of this imagined debate, he would throw her a DNA test kit, Trump told the raucous crowd, "when she proclaims that she's of Indian heritage because her mother said she has high cheekbones," Huffington Post reported.

Taunting Warren, Trump said at the MAGA rally, according to a video clip posted by Reuters:

We'll take that little kit and say — but we have to do it gently because we're in the 'Me Too' generation, so we have to be very gentle — and we will very gently take that kit, and we will slowly toss it, hoping it doesn't hit her and injure her arm, even though it only ways about 2 ounces.

Belaboring his jab, the president continued to tell the crowd that he'd donate $1 million to the charity of Warren's choice if the Massachusetts senator took the ancestry test to prove she's of Native American descent, according to Reuters. "I have a feeling she will say no," he added.

This is the first time Trump has publicly acknowledged the #MeToo movement, launched 10 years ago by activist Tarana Burke as a way to support, help, and mobilize sexual assault survivors. But, for his critics, it comes as no surprise that the president would make fun of #MeToo. After all, at least 19 women have accused Trump of sexual harassment and assault, with the majority of reports lodged after he announced his presidential run in 2015, according to Snopes. He has denied every single accusation, and has gone to lengths to discredit the women, Snopes reported.

Not to mention, Trump had once boosted about sexual assault on the now-infamous Access Hollywood recording obtained and published in 2016 by The Washington Post. On the tape, the president could be heard telling former host Billy Bush that he's able to do whatever he wants to women because they'll "let him," — even "grab them by the pussy," according to The Washington Post.

Adding to that: The same day Trump made his joke, the White House announced that former Fox News Co-President Bill Shine had been hired as the new deputy communications director, according to Refinery29. Shine is a controversial character in his own right: He was ousted from his post after reports revealed that the former executive covered up decades of sexual misconduct claims, including those against embattled former Fox News host Bill O'Reilly, Vox reported.

The #MeToo movement has helped bring down dozens of men in the entertainment and food industries who have long histories of sexual harassment and assault. In fact, because people had the courage to come forward, Hollywood executive Harvey Weinstein has been indicted on multiple sexual assault charges, according to USA Today. But as long as there is a president opening mocking the campaign, the #MeToo movement will face a long road to changing the way sexual assault is treated in multiple industries.