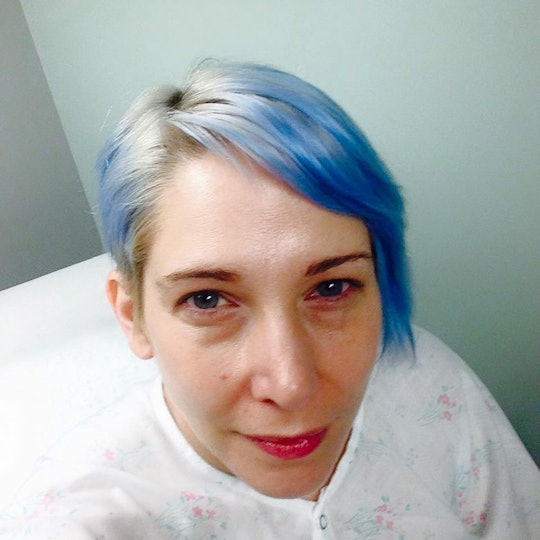 I'm not going to lie, I was completely unprepared for my first biopsy. I thought I was going in for a simple skin check, like I have every year of my adult life. Then my doctor asked, "Have you always had this mole?" and handed me a mirror. She pointed to one of the many marks on my back and I knew, instantly and from the look on her face, that something was wrong. "I want to do a biopsy," she said. I had no idea what I was in for, and learned firsthand how scary and nerve-racking it is to wait for biopsy results.

Prior to that day, my only "experience" with or knowledge of biopsies came from Grey’s Anatomy. I never thought that I would have to have one (let alone five), and I can tell you, dear reader, that real life is nothing like television. The actual procedure itself was no big deal, except for the fact that the nurse accidentally left the specimen container in my line of sight. (In case you didn't know, it's surreal and creepy AF to see a piece of yourself that's been cut off your body.) Let's just say it was a good thing I was already lying down. And as my doctor stitched me up, I pondered the idea that a part of my body could be actively trying to kill me.

I thought the sample would be sent to some nearby lab, and that lab would process it immediately, and I would know my fate, one way or another, in minutes. Maybe hours. But I was wrong. I had to wait three to seven days to find out the results. And that, of course, meant enduring three to seven days of worry, panic, and regret.

When the call finally came that I had a stage one melanoma, a diagnosis that would require surgery, the real panic set in. Fortunately, and because of that biopsy and early detection, the surgery was successful and the doctors were able to get it all. In the end, I only have a few scars to remind me of that moment in my life. A moment when a run-of-the-mill doctor's appointment turned into a potentially life-threatening situation.

Since that first biopsy, I’ve had four more. You would think that it would get easier, but you would be wrong. In many ways, actually, I think it gets worse with each subsequent test. Always, always, there are so many things that go through my head while I wait on the results, including the following: