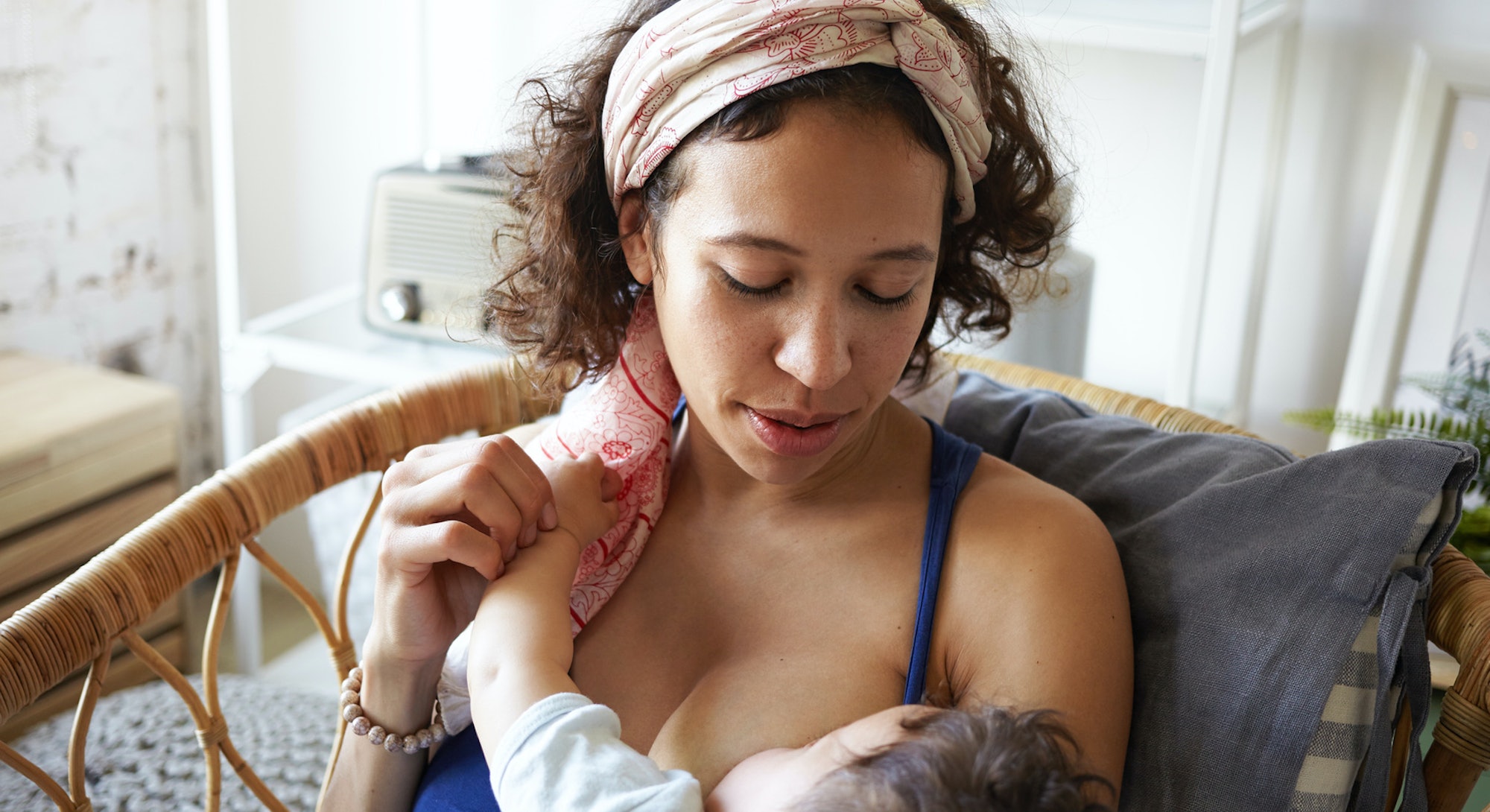 There is no one breastfeeding story. Some love it. Some hate it. Some try it for a few days, while others continue for years. Some are supported by family and professionals, some feel very alone. Some are shamed for their choice, others are praised. Some prevail in the face of seemingly insurmountable difficulty, and others find it comes to them very easily. Broadening our ideas about what breastfeeding looks like is an important part of the effort to destigmatize the range of experiences, and diffuse a reactive culture to breastfeeding. The photos here capture little pieces of the breastfeeding journeys of 21 different women — from first latches to tandem-nursing toddlers, from struggle to jubilation.

It's probably not news to you that the American Academy of Pediatrics recommends exclusive breastfeeding until 6 months "followed by breastfeeding in combination with the introduction of complementary foods until at least 12 months of age, and continuation of breastfeeding for as long as mutually desired by mother and baby." (The World Health Organization recommends continued breastfeeding until at least 2 years of age "or beyond.") In the United States, we don't know how many mothers would like to breastfeed, but according to the latest data from the Centers for Disease Control and Prevention (CDC), approximately 81 percent will nurse at some point. This, however, is a cumulative figure. Breastfeeding statistics by location (state, city, or even neighborhood), income, age, education, and race can tell very different stories. And if those figures represented personal choice, there would be no problem. But the fact of the matter is that access to breastfeeding education and support is unevenly available, accessible, and encouraged across the board. This must change, because everyone deserves to be supported in their options before making a choice about how to nourish their child.

The women featured here prove that while there's a wide variety of experiences, they're all worth sharing, supporting, and celebrating.

"This picture is from when I was only six months into my journey and had already been through so much. Knowing that something as simple as me nursing my baby in the ocean she was originally afraid of — but changed her mind [about] once I gave her this comfort — is what gave me this joy."

"Nothing is more beautiful..."

— Raissa, mom of one, Democratic Republic of Congo

"This was taken in the inner city of Kansas City, Missouri, in 2017. I wanted to capture the beauty and culture that is in this neighborhood while simultaneously capturing the mother and daughters bond as well as the connection to each other and the woman's strength as a mother. Their gaze is similar and very telling of their bond as mother and daughter."

"Alix" tandem nursing a toddler and a newborn, Los Angeles

"I was lucky that breastfeeding was always easy for me and my children. I can't swear it was the breastfeeding that did it, but both have always been in great health, rarely sick, cheerful, and easily comforted. Being able to nurse seemed to solve every problem — hungry, sleepy, frightened, in pain, stressed out babies almost instantly calmed down as soon as they nursed. It made life so much easier in so many ways."

"This is me, exhausted, and shamed into sitting in a corner at a family party pretending to hold a pile of laundry."

"[I wanted to show] the beauty and strength of our black women in our inner city communities. I wanted to uplift these women and truly show them there is beauty all around them and they should beam with confidence regardless what society may say about them or their community."

"I thought breastfeeding would be an easy and wonderful journey! Like many things in life there were ups and downs and I ended up having to adjust my goals after nursing aversions and struggled with my first baby getting him to gain weight. Breastfeeding taught me to be flexible but also offered an incredible bond with my babies and is one of the coolest things I’ve done with my body!"

"This strandkorb made breastfeeding on the beach a bit easier!"

"I loved breastfeeding my first child. I loved the connection I felt to him, especially late at night when all was still in the house and it was just the two of us, our own private world.... Breastfeeding my second child, although still amazing, has been a very different experience ... definitely more utilitarian and task-like. I feel a little sad and of course guilty that I am not able to pause and enjoy it as much as I did with my first."

"This image was taken in Topeka, Kansas at the state capitol building. She is in the Army Reserves. ... People assume breastfeeding is the same for everyone or is representative of a certain demographic or class. I aim to break that stereotype."

"I started law school when my first baby was 1, and had a second baby right before the start of my third and final year. I was in kind of a triathlon of circumstances and found that breastfeeding was a wonderful way to be consistent and solid for my little one. I schlepped those kids all over creation so that I could steal a moment to get work done, and was constantly afflicted by uncertainty, exhaustion, stress, and dread because of my workload. Breastfeeding was a silent refuge, at least for my baby, and I couldn’t imagine taking that from her. "

"Initially, my only goal for nursing my twins was to make it to four weeks. It was difficult to develop a nursing relationship with each of them individually, but I’m so glad we made it work. This picture is of our last session together - right before they turned 2!"

"In April of 2018 ... I organized several public breastfeeding 'take overs,' so to speak, in the Kansas City Metro area to bring awareness to the fact that it is legal to breast feed anytime, anywhere in the state of Missouri. ... There were five breast feeding women in this photograph although not all women are visible."

"The feeling I get from stepping into motherhood and straight away breastfeeding my baby is powerful. The way my body can not only grow little humans but also have the capability to feed them is unbelievable. I encourage new mothers who are in limbo over breastfeeding, to give it a try and always remember that time will heal. It’s not easy, but we soon learn that nothing about motherhood ever is but that little smile on her face makes everything all worth it."

"I wasn’t sure if I would be able to breastfeed due to a breast reduction seven years prior to [the birth of] my daughter. With the support of my husband who made sure I was well fed and cared for, we were able to get off to a great start and I was grateful for the 25 months I got to nurse her. With my newborn son, I’m far less anxious about it and am soaking in the newborn snuggles and worrying a lot less."

"Although breastfeeding was always the natural choice for me, it didn’t come easily or naturally with any of my three children. From nipple confusion and exclusively hand expressing into bottles with my first, to the opposite end of the spectrum with my second-- a power ‘nurser’ who never took a bottle and nursed round the clock for 3 years and 8 months-- to our newest addition, who has a lip and tongue tie, possible dairy allergy, and other nursing related issues, I would do it all over again. The bond I have with my children because of nursing is beautiful and had given me such a sense of accomplishment. Truly one of the hardest things I’ve ever done in my life, but definitely the most rewarding!”