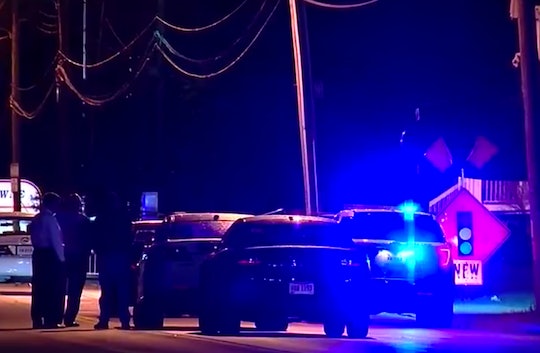 Authorities in Ohio are working to identify the suspected shooter or shooters behind a nightclub shooting that left at least one dead early Sunday morning. And what happened in Cincinnati overnight seems to have been truly terrifying, drudging up horrifying memories of similar past events across the country. One Cincinnati Police Department official described the scene at the club right after the shots were fired as "just a lot of chaos," according to CNN, and at least 14 people were ultimately injured.

Police initially reported that multiple shooters were responsible for the incident, which exploded into violence sometime at about 2:20 am. at Cameo Night Club in the city's East End. Soon after, they amended the scope of their search to one suspected shooter, but there are not yet any suspects in custody. Police are confident that this was not an act of terrorism; The Washington Post reported that the shooting may, in fact, have stemmed from an earlier dispute between two people or groups.

Two police officers the hip hop club had hired to supply extra security detail were there at the time, and local CNN affiliated WLWT reported that one witness said that the DJ had called for security about 10 minutes before the shooting.

Still, Assistant Police Chief Paul Neudigate estimated that hundreds of people were inside the club when the violence broke out, he told WLWT. And, predictably, the sounds of gunfire sent many of those people into a panic.

"It was just a lot of chaos, obviously, when the shots went off," Cincinnati Police Department Capt. Kimberly Williams told CNN. "People [were] just trying to get out of harm's way."

Because of the number of victims, the event Neudigate called a "horrific situation" has assumed the unhappy distinction of the worst mass shooting in the United States so far in 2017, according to Cincinnati.com. And, for the injured — all of whom were shot — the road to physical and mental recovery may be long: One victim taken to the University of Cincinnati Medical Center was in critical condition, local station WCPO reported, and the conditions of three others were listed as serious. Four were stable.

No identities, neither of victims nor potential suspects, have been made public. And although no one has been arrested for the crimes yet, WCPO reported that investigators working throughout the night had been focused on a white car near the club, which it described as a "large, warehouse-style venue," and that the vehicle was towed away at around 6:30 a.m.

If that turns out to be a viable lead, anxious Cincinnati residents and Americans in general may have more information with which to understand the latest nightclub violence to plague the nation. Back in November, shortly after Thanksgiving, 10 people were shot and one killed at a nightclub shooting in New Orleans' French Quarter. Before that, of course, was the breathtakingly tragic slaughter of 49 clubgoers at Pulse in Orlando in June. It was the deadliest American mass shooting of all time.

Even Cameo has seen violence before, according to WLWT. On Jan. 1, 2015, a person was shot in the foot there; in September of that year, a shooting victim's body was found in the parking lot.

As always, Americans hope that this will be the last. But history and the Congress's infuriating refusal to enact stricter gun safety legislation all but guarantee it won't be.