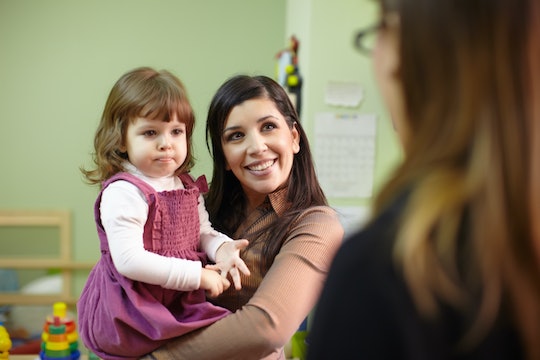 What To Tell Your Kid's Teacher If You Suffer From #NoFilter

I'm a highly emotional, but not terribly sentimental person. Milestones always got me excited, but never melancholy. When friends would get weepy about the fact that their little ones were growing up, I was always the voice of encouragement, urging them to think positive. Then it was time to send my oldest to kindergarten and I lost it. How was he going to handle school? Was he going to be OK socially? Academically? Would his teacher know how to teach him? I'm sure there are things every mom wishes she could tell her kid's teacher... and then there was me, who took it to a whole different level.

I view my outsized fear of sending my child to school as partly practical (he was a stubborn child who did not particularly care for authority figures) and partly symbolic. Look, if I stressed out about everything I could stress out about I would have been overwhelmed by fear before the little dude was even born. As a matter of survival, my brain has allowed me to take it day by day and not fixate on particular worries. But sometimes an issue will come up that somehow comes to encapsulate many other issues that worry you (which you are, mercifully, able to sublimate). For me, that was school.

I'm a talker — I process the world around me by communicating with people — so a lot of the things that I wish I could say to my kids' teachers I've actually said in some kind of capacity, because #nofilter. Sometimes, however, I do manage to restrain myself (or at least manage a bit more tact), which is why there's still a list of things I haven't said to my kid's teacher. And in a perfect world I'd be able to say those things, and convey the following: