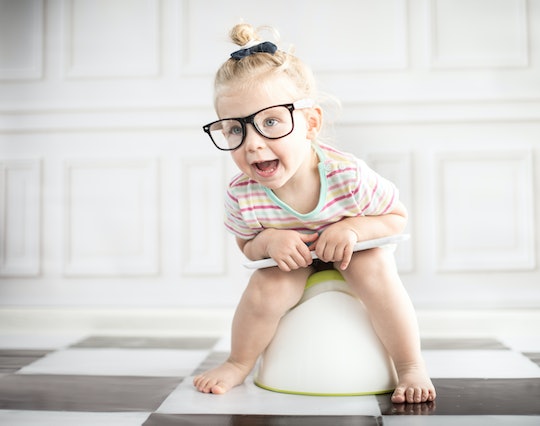 The Best Time To Potty Train Your Toddler, According To An Expert

Is there any aspect of early childhood parenting crappier than potty training? I mean, a lot of it is really hard, but teaching your kid to use the toilet is literally crappy. Not only is it hard to figure out how to potty train your toddler, but there's the question of when. As in, when is the best time to potty train?

Romper spoke to potty training consultant Allison Jandu to learn some tips and tricks, because goodness knows a lot of us parents don't even know where to begin.

Let's start by reasserting two things that, at this point, should just be the official motto of parenting. One, there is almost never One Right Way to do literally anything when it comes to raising a child. And two, the spectrum of "normal" is almost frustratingly broad. According to Jandu, there's "really no one-size-fits all with potty training," and that the best age varies depending on the child in question. She does, however, assert that "between 22 and 30 months is the best time frame."

Why? It mostly has to do with a child's physical and psychological development. Jandu says children in that age range are not only likely physiologically equipped to begin potty training — walking, able to communicate verbally, and possessing the physical ability to hold their bladder and bowels — but they're in a good mental space to be set up for success as well. "It'll be a little bit easier for you if you do it in that window," she says. "Because they're still probably in that phase of wanting to mimic you and do what you're doing and they tend to see you as being there to help them and it's easier to teach them and praise them without having to bribe them with something."

And this window being the "ideal" time, in most cases, has as much to do with the benefits of this particular age range as the potential challenges of waiting until later to potty train. "If you're a parent who's waited a little bit later, that's fine," Jandu says. "But as a toddler continues into their age they start to come into themselves. They develop independence and their own personality and they know how to use it."

And let's not forget how much kids are dispositioned to love routine. So, like a cranky little old person, toddlers will tend to get staunchly defensive of doing things the way they've always done them... and, for a toddler, that includes soiling themselves. "When you try to change that routine [with an older toddler] you're going to get resistance and pushback a little bit more," Jandu says.

It might be something in your teaching style that isn't meshing with their personality.

As any parent of a young child will tell you, an eight-month window is a long time, and during that time your child's personality, abilities, and preferences can change dramatically. Fortunately, whether they recognize it or not, your kid is probably giving you some signs they're ready to potty train.

"The best sign you can look for are asking to have a diaper changed," Jandu says. "That's a sign that they're getting more of that body awareness... More subtle would be that they're resistant to diaper changes." Other signs include a general interest in the bathroom and what goes on in there (OMG is that why are toddlers always want to watch us pee?!), an increased ability to follow simple directions properly, and, my personal favorite, hiding (or going somewhere specific) to poop.

"Hiding to poop is a big one," Jandu says. "That means they can tell that they need to poop before they actually go and have a better awareness about what's going on with their bodies."

But let's say all the stars have aligned — the time is right, your kid is scurrying off to the living room corner to poo, and they're able to tell you they need to go and get to the bathroom on their own — but your kid is having none of it. They're just fighting you tooth and nail and peeing on the floor in what seems to be spite and you're just standing there, haplessly clutching your expert book on potty training as you sob.

This is very common, Jandu says, and there's hope.

"A lot of times it may just be a simple tweak that you need to make," she continues. "It might be something in your teaching style that isn't meshing with their personality." Jandu advises parents really think about the way their child learns and respond to authority. In other words, if insistence usually makes them dig their heels in, maybe back off a bit. If they're more easily directed, perhaps try giving more prompts. "It's just a matter of finding that technique that is going to work with your child's personality ... and being consistent with it," she says.

Like any parent probably already knows, Jandu says kids will test their parents, so as long as parents can remain consistent and firm about ditching the diapers their child will eventually get the hang of things. "Stick with it but try to tweak a couple things to find something that works better," she says. "Don't just assume they're not ready and go back to diapers."

Again, every child is different, and there is no Perfect Time to teach a child how to use the toilet. But being cognizant of the "window" in which you're likely to have more success will definitely help. And, hopefully, before you know it you can stop ordering those diapers via Amazon.

More Like This
Julia Fox’s Apartment Tour Is Peak Mom Realness
What To Do If Your Toddler Keeps Taking Off Their Diaper At Night
Covid Vaccine “Deserts” For Kids Under 5 Make It Almost Impossible For Parents To Find Shots
Tips to Beat Jet Lag, For You & Your Kids
What Parents Are Talking About — Delivered Straight To Your Inbox