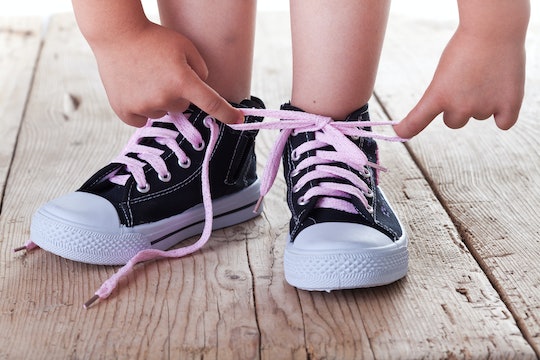 When Should Kids Start To Tie Their Own Shoes? You Might Be Surprised

My daughter is 6 years old and a total shoe addict. She's got a closet full, but she only has one pair with laces. Why? Because she can't tie her own shoes. But when should kids start to tie their own shoes? Is this a milestone that has a pretty definite age requirement?

I'm not sure we're there yet with her, to be honest, but we're working on it. She has plans for new shoes the way most people have plans for their retirement accounts. My daughter has her own Pinterest board that is just shoes for little kids (and also, a little inexplicably, the shoes of Prince and Lenny Kravitz).

According to Parenting magazine, most girls aren't ready to tie their shoes until about age 6, and most boys aren't ready until at least age 8. The reason for the disparity isn't clear, but kids can and do mature at different speeds, and it's not always possible to pinpoint the exact moment of readiness in a child. I know that my daughter is trying. She's not ready, not yet, but she wants to be. Just this morning, I was trying to take her picture tying her shoes for this article and it ended in a fit of tears because she wanted to show that she could do it, even though she couldn't. No amount of "It's OK, Pumpkin, you can just hold the laces" was enough for her. She's determined to tie her shoes before school resumes in September, because again, she has plans.

But not all kids are ready even by age 8, according to Caroline Pediatric Therapy, and kids who have delayed fine motor skills, like my son who is on the spectrum, may not be able to tie their shoes for a few years after that. My son learned to tie his — not well, mind you, but it was a huge win — just before he turned 9. His occupational therapist worked tirelessly with him to master those tiny manipulations, which are necessary to tie shoes. Now, at 9 and a half, he's got it mostly down. Yes, sometimes it becomes what he refers to as "an impossible bloody knot," but it's done.

While The Telegraph pointed out that the age children tie their shoes has been pushed later in recent years, parents are less apt to force their children to do things before they're ready to than they once were. Families aren't as large, and it's not as burdensome to tie some shoes a few times per day.

If you find you're struggling with your child to tie their shoes, they may simply not be ready, but it may also be the knot. The classic "bunny ear" knot isn't actually that simple if you think about it. Thankfully, there are easier ways of doing it, and a plethora of YouTube videos to show you how to do it. Again, we're still not there, but it worked for my son, so I know it can work for most. As for my daughter, well, Lenny Kravitz mostly wears booties, and thankfully, those have zippers. We're good for a while, provided I can find her some in leopard print or python.