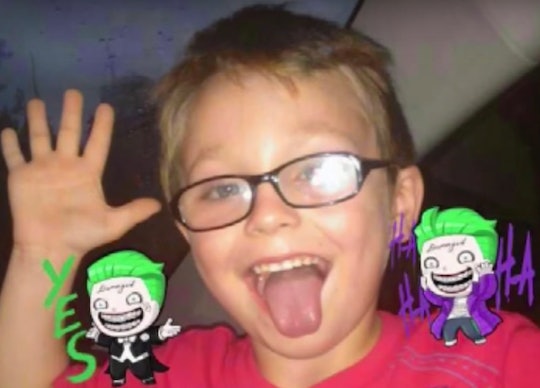 Where To Read Jacob Hall's Obituary & Why It's Important

To his family and those who knew him best, Jacob Hall is and forever will be a superhero. To those who never got to meet the first-grader — to experience his devotion to his faith, the way he'd place a hand on his mother's cheek to make her smile after a tough day — now-widely publicized images of his face represent yet another child lost to gun violence in the United States. Jacob died Saturday at just 6 years old, days after being shot in the leg outside this South Carolina elementary school. Now, the little boy's family is planning his superhero-themed funeral. But there's no acceptable reason why anyone should be thinking about a funeral for a child who, not too long ago, was heading out to the playground with his classmates — and that's why it's so important to read Jacob Hall's obituary and the information his family and community has released about him as they grapple with his death.

On Wednesday, a 14-year-old gunman shot Jacob, another student, and a teacher who was trying to protect them both during a horrifying afternoon at Townville Elementary School. The teacher, Meghan Hollingsworth, and the other young victim were treated and released from hospitals that day, but Jacob sustained massive blood loss from a gunshot wound to his femoral artery, and died just before 1 p.m. Saturday.

While no formal obituary has been placed as of yet, the family has not remained silent, taking to social media and various media outlets to openly grieve. In a statement released Saturday, Jacob's parents, Renae and Rodger Hall, wrote that they believe that their son's life was meant to show them that "pure love" does exist in the world. "Jacob came into our lives six years and four months ago and changed [them] completely. He showed us how to love, laugh and smile even on days we did not want to," they wrote, according to USA Today. "God gave him to us and he was taken away from us by a senseless act. We know that Jacob has already forgiven this child for what he did to him and his family because that's the kind of child he was."

The 14-year-old was arrested at the scene and has been charged as a juvenile with three counts of attempted murder and one count of murder, as he is suspected of killing his father before driving to the school as well. One of those attempted murder charges is now expected to be upgraded to murder.

But murder — that word made even more awful when associated with a 6-year-old child — isn't the message Jacob's family is transmitting to the world.

In a public Facebook post, Jacob's brother, Gerald Gambrell, called the boy God's "strongest soldier." "Jacob will be with us forever and always in our hearts," he wrote. "I love you little brother and I can't wait till the day we meet again. Your [sic] my hero buddy. I love you so much watch over your family son."

It must have been an excruciating Facebook post to write, and a surreal one at that. The school district that encompasses Townville Elementary, Anderson School District 4, referred to the harrowing ordeal that resulted in the death of a child a "tragedy that cannot be explained or easily understood," and it certainly is. The shooter's possible motives are not yet known, and it's nearly impossible to imagine what could have compelled him to do this. But what is clear is that he somehow acquired a handgun that he allegedly used to ultimately kill and injure a handful of people.

Considering that the teenager is suspected of killing a parent before opening fire on an elementary school, the Townville shooting is eerily similar to the Sandy Hook massacre in 2012, which left 20 first-graders and six adults dead inside the school, as well as the gunman's mother, who was shot dead in her home. After that shocking, heart-wrenching day, Congress failed to pass any gun safety measures to keep America's children safe. The same is true after the deadliest mass shooting in the country's history at Orlando's Pulse night club in June. In fact, the United States has not experienced any meaningful changes to gun laws since a gunman slaughtered 32 people at Virginia Tech University in 2007, when Congress voted to strengthen the instant background check system for purchasing a firearm.

Meanwhile, there have been 196 shootings have occurred in schools in the United States since 2013. It's true that the gun control measures that lawmakers voted down following the mass shooting in Orlando may not have prevented this particular tragedy, as we don't yet know how the suspected shooter acquired the gun. But it's also true that the gun lobby in the United States prioritizes its own interests over American lives, leading to the country's unhappy distinction of having the highest rate of gun violence in the developed world, with a gun homicide rate six and 16 times that of Canada and Germany, respectively, according to Vox.

And that's because these potentially deadly weapons are so readily available here: In 2007, civilians in the United States owned 88.8 guns for every 100 people — by far the highest number in the entire world — with the rate of privately owned guns in the second-place country, Yemen (a "quasi-failed state torn by civil war," Vox reported) coming in at 54.8 guns per 100 people. There's no doubt that more guns result in more gun deaths, no matter how you look at it.

Jacob Hall's mother has asked that guests at her son's funeral wear superhero costumes or t-shirts, according to FOX Carolina. Jacob will wear his superhero costume, as will his pallbearers. "I don’t want suits and ties and all that," Renae Hall said at a press conference. "There will be a lot of children there and I don’t want it to be scary for them." She believes that flying with the angels is Jacob's new superpower.

But in a country where guns like the ones that killed Jacob are so, so readily available, perhaps his face will have another power: encouraging lawmakers to agree to enact real change.