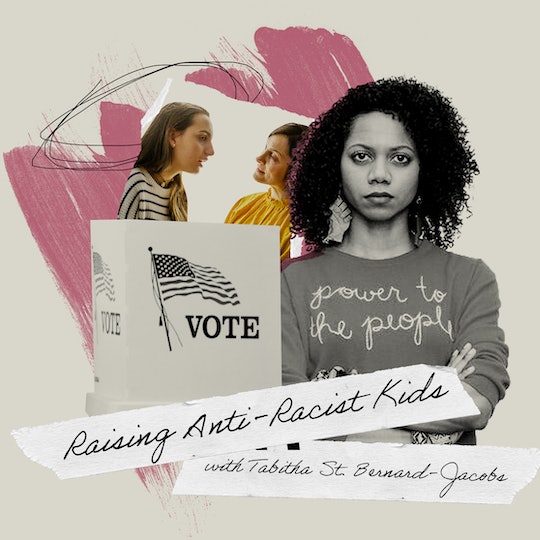 White Moms: You Need To Step Into Your Power Right Now

We have a little over a week until the election and today, I’m talking to white moms. Voting gives us all the power to not only elect the president of the United States of America, but to vote down the ballot for tons of positions, from school board seats to district attorneys. That means you get to weigh in on who makes those localized decisions, which deeply impact the lives of Black and Brown people. Your actions right now set an example for your kids about what civic engagement looks like within the context of racial justice. If you were moved by the wave of activism that swept the country post-George Floyd, voting for candidates that center and prioritize the issues impacting Black and Brown lives is imperative. Voters of color don’t have the privilege of being disengaged; decisions made by elected officials affect our lives deeply, including policies that could fundamentally change policing, housing, education, and so much more in our communities. So today I’m speaking specifically to white moms because you have the power to make real change right now and I encourage you to step into that power, own it, and act accordingly.

I know that if you’re reading this, you’re probably not one of that 48%.

The fact is: 48% of white women supported Trump in 2016. (This stat is slightly different from exit polls that showed 53% voting for him; the Pew Research Center released the figure 48% as more accurate than that initial data.). 48% voted for a man who bragged about sexually assaulting women and against the lives and rights of so many people who are historically marginalized. I know that if you’re reading this, you’re probably not one of that 48%. But you may know other white women who are within that percentage. They probably tell you within the safety blanket of whiteness what they really think about Trump, what they really think about Black people, what they really think about this country’s recent shift towards amplifying racial justice.

Being an accomplice is about taking action to defend communities who have been historically marginalized. Now is the time for you to do that. Everything is at stake.

You may stay in these relationships because they’re your family, or they’re the moms of your kid’s classmates, or maybe they’re your childhood friends. Whatever the reason, here’s what’s important: You have the power to change hearts and minds about the type of administration we need to safeguard the rights of our families, our communities, and ourselves. Spending your privilege is a key part of being an active accomplice, not just an ally. Being an accomplice is about taking action to defend communities who have been historically marginalized. Now is the time for you to do that. Everything is at stake.

You have the power to show your kids that whiteness is a privilege to be spent especially in times of strife. It’s moments like these, when Black and Brown people are asking white accomplices to speak to your people, that you can have the most impact. You might be worried about rocking the boat or changing a relationship forever. I’ve got news for you. That boat isn’t where you want to be. That boat presents a false sense of security for you that Black and Brown people simply don’t have. Every day of our lives, we live with the impact of the choices that white people make because we live in a country where whiteness is centered.

So you’re probably wondering HOW to do this? The first step is being willing to have those uncomfortable conversations, even when it scares you.

“Starting the conversation is hard,” wrote Jenna Arnold in her book, Raising Our Hands: How White Women Can Stop Avoiding Hard Conversations, Start Accepting Responsibility, and Find Our Place on the New Frontlines. “Staying in it when you hear things that make you uncomfortable is probably the hardest part. Stay focused on the reason you’re choosing to engage with this person and stay committed to ensuring that they’re also armed with the knowledge that you have.”

Arnold, a friend of mine, shared some examples of great ways to go there and get the conversations started. Keep these in your back pocket over the next critical days. Practice them. Say them out loud so that you are prepared. There will be opportunities to speak up before November 3. You might be the person to shift someone off of the fence.

IF: Your mom friend down the street mentions that she hasn't voted yet:

YOU CAN SAY: “Given the influence that the US has around the world, in ways we might never see or appreciate, the American vote is one of the most prized civic exercises on the planet. That plus so many women suffered so we all could have the right to vote — and Black women waited nearly 5 decades to exercise this right — it seems like a pretty important step to take. Let’s make a plan for you, together”

You’re talking to your mom or grandma about Thanksgiving plans and she brings up Amy Coney Barret's beautiful family.

“It does look like her children are doing well. It hurts my heart that positions she’s taken don’t seem to extend to protecting all children to the same extent she does her own.”

You run into a neighbor at the grocery store and she says something about Black Lives Matter being a terrorist organization.

“It’s important to examine why Black Lives Matter is viewed this way and who is viewing it this way. The reality is that it is a movement that centers Black people and speaks to issues that directly impact them. I try to listen to the people closest to the problem when examining solutions that impact them. I can say with certainty that they are not a terrorist organization. I’m happy to send you some resources that have helped me understand the movement.”

You see fellow parents on Facebook complaining about the local school reopening plan.

“We have to remember, this pandemic has shed a light on all the cracks of society, including all levels of government, from the oval office to our school. What’s important to remember is that the system breaking often impacts Black and Brown communities the most — so while we care about our kids’ academics staying on track, if we’re not careful the divide is going to grow even bigger amongst those that have and have not. Our focus needs to be on the whole of us, while, yes, also making sure our individual teachers and their students are safe to return to their classrooms too.”

Trump knows that white women are a major deciding force in his election.

Next, if you haven’t gotten yourself and your family involved in this election, it is not too late. We need a final push and you can be part of it:

1. Make sure you are all set to vote. Think of it as airplane safety. Secure your voting first before thinking about others. Do this with your family so that your kids get to know the process. Make a plan to vote and make sure all eligible family members do the same.

2. There are tons of people up for election this November. Don’t know which way to go? Take your ballot, check the seats up for reelection in your state, and see who your fave organizations have endorsed.

3. Host a text banking party with a few friends who are already in your camp. Never done it before? No worries. Women’s March has great trainings for first time texters.

This election season has already been difficult for so many people, especially those of us who have been deeply impacted by this administration’s blatant disregard for the rights of communities on the margins. As Black parents, we worry about our children, our loved ones. This election season, you can step into the fight with us and do the hard work of helping bring this one home. Do it for the future of all our children, who deserve the full promise of a country that is becoming more and more diverse — and who deserve parents who fight for that future. This election is going to take all of us putting it all on the line, to protect us all.

Trump knows that white women are a major deciding force in his election. You have the opportunity to prove to him that not only are white women not as complicit as he is assuming they are, they’re also more aware of who will be protecting their rights as women and the rights of all children.

Identify three people in your life that you know aren’t convinced about which way to vote this year. With the tips above, commit to engaging with them in conversation around this election. This election is going to come down to relational organizing. That means you.

Please Talk To Your White Children About Breonna Taylor

How Can Learning Pods Be Equitable? They Can’t.