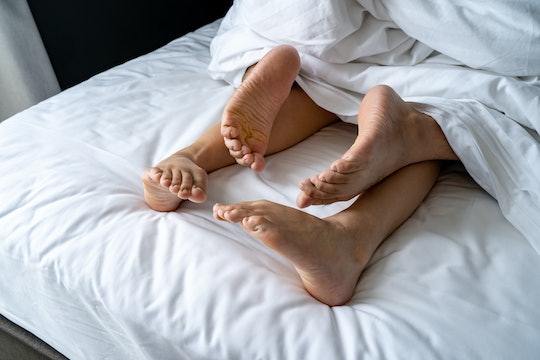 Here's Why Your Vagina Might Bleed After Sex Sometimes

When you’re in the throes of passion, you might not realize that all of that bumping and grinding resulted in a lot of liquids. So when you look down at your sheets after sex and see blood, it might be rather shocking — and frankly, a little scary. And it you might make you wonder why your vagina bleeds after sex.

Truth is, you may experience blood loss for many reasons after a romantic rendezvous. Obviously, the first time your vagina might bleed after sex is, you know, because it’s your first time. “If you haven’t had sex before, then you may have an intact hymen,” Dr. Geoffrey Cly, an OB, tells Romper. “Since the hymen is made of very soft skin, during sexual intercourse it could be stretched and torn.”

Another reason why your vagina might bleed after sex is one that your partner will probably be proud of. If he’s well endowed, then his penis can stretch the skin of your vagina and cause some vaginal tearing. “Those are linear tears extending vertically up the vaginal wall,” says Dr. Cly. However, if your partner’s penis is large and long, it could cause a horizontal tear through the top of the vagina, which might be more dangerous. “It’s great to have vigorous, enjoyable sex,” says Dr. Cly. “But try to listen to your body in case it becomes too intense.”

That’s why a little rough and tumble (keyword rough) between the sheets might also cause bleeding. “Similar to the hymen, the skin of the vagina is very soft, like the inside of your mouth,” says Dr. Cly. “So it’s more subject to tearing or scratches if there is vigorous friction during sex.” While that might not necessarily stop you from roughing it (literally), you should still be careful to make sure that pleasure doesn’t quickly turn to pain. “If you’re feeling extreme pleasure, you might not feel as much pain because the pleasure nerves are the most excited,” explains Dr. Cly.

But your body will give you a warning sign if things are getting too intense — if you hear a pop and then realize that you’re bleeding, it’s most likely a sign that your vagina tore and ripped. Depending on how much you’re bleeding (and how much pain you might be in), you should speak to your gynecologist right away or head to the ER for an evaluation.

On the flip side, if your girly parts are dry or thin, you might be more susceptible to bleeding. That can result in small areas that can bleed because the friction from intercourse is rubbing those areas raw. Known as vaginal atrophy, this can occur when your hormone levels drop (think menopause or perimenopause), reported the Mayo Clinic. “Fortunately, vaginal atrophy is completely reversible with medications, hormones, or other therapies and can be converted back into normal elastic pliable, healthy vaginal tissue,” says Dr. Cly.

Breastfeeding can also be a contributing factor to bleeding. “When you nurse, your estrogen level is lower and the vagina is dryer,” says Dr. Cly. “Bleeding during the lactation stage can occur because of the friction due to the atrophic-like state of the vagina.” If you find that things are dry as a bone during breastfeeding, you can use some lubrication to prevent pain and reduce the rubbing, as per Healthline.

And if your period is about to come, that might also bring on some bleeding. Since an orgasm consists of a series of uterine contractions, according to Babble, they can squeeze the inside of your vagina. So if you were about to have your period, the orgasm can actually initiate it. “When that happens, some of the bleeding might be coming from your uterus instead of the vagina,” says Dr. Cly. Thing is, you may not realize it because the blood will appear at the opening of the vagina. The same thing can also occur when you’re about to ovulate, too. “Hormone changes can trigger and destabilize your uterine lining, so having an orgasm around ovulation might result in a slight amount of spotting,” says Dr. Cly.

Slight spotting or light bleeding once in a while after a night of nookie usually isn’t anything to worry about. But if you experience consistent or heavy bleeding, you should definitely speak to your OB/GYN about it to prevent any further complications.