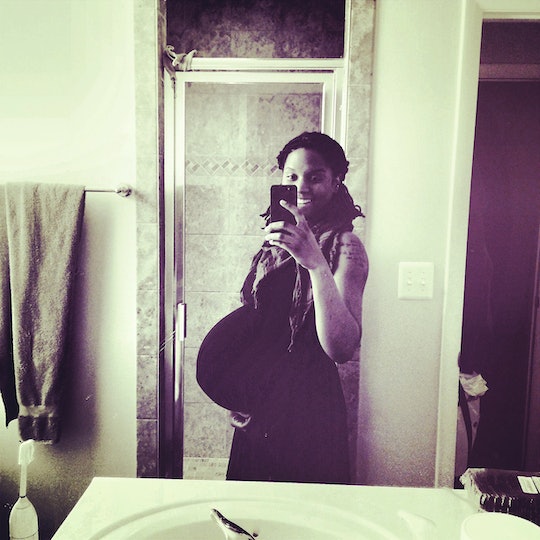 Why I Will Always Celebrate My Laborversary

Every year, on the day before my son's birthday, I try to wake up as late as possible. I get a nice, long massage, I eat pho with my family, and reminisce about my son's birth story. If I have time, I take a nice long bath, too. I always celebrate my "laborversary," the anniversary of my and my son's birth story, because one of the biggest lessons I learned after spending over 40 weeks making a baby and 21 hours birthing him, is that birthdays don’t just come out of nowhere.

Before I went through the work of growing and bringing a human being into the world, I was just as guilty of the aforementioned — forgetting where birthdays come from — as anyone else. Until I became a biological mom, it never occurred to me to stop and recognize or acknowledge the women whose blood, sweat, and tears put the birth in birthday. However, mothers work to make birthdays possible, and we deserve some celebration and recognition, too. (And not just on Mother's Day, either. One, that day isn't just for or about biological moms. Two, Mother's Day is supposed to be a day of activism. And three, it's kinda impossible to over-celebrate moms, you know?)

My laborversary has become another reminder to recommit to myself, so that I can continue working on behalf of others.

Four days past my estimated due date, I was huge and impatient and uncomfortable and completely, totally over being pregnant. By then, I had been walking, dancing, and everything else I could think of to try and kick start my labor, or at least get a handle on my wayward emotions. Finally, I booked an appointment for a massage, during which I mentally had a conversation with my still-unborn little boy, apologizing for trying to rush him and accepting that he'd come in his own time, not mine. A little while afterward, my husband and I had some pho for dinner — my favorite all through pregnancy, and my go-to food whenever I'm weary and my soul needs extra care — and shortly afterward, I finally started feeling those "Oh, sh*t!" contractions that let me know it was definitely time to call the midwife. (Everybody was right: I really did just know when it was time, and I probably could have spared her a lot of text messages those last few weeks.)

I love recalling the rush of relief and excitement I felt when I eventually pushed my son into the world, and was finally convinced that pregnancy was not some kind of sick, endless joke.

I love recalling and celebrating my son's birth story, because childbirth is the most challenging, most exciting thing I have ever done. Feeling those first real contractions, and knowing that I was finally about to meet my son, was indescribably thrilling. I loved slinking into my tub, and feeling the warm water quiet my angry muscles while they worked. I loved how close I felt to my husband as he held me during the hardest parts of labor. I love laughing about how we mistakenly thought my labor would be much shorter than it ultimately ended up being, and how comically mad I was at my whole birth team (at times) for constantly telling me how great I was doing and how much progress they were seeing, especially when I felt under complete siege by my own uterus and convinced my labor would never end. I love recalling the rush of relief and excitement I felt when I eventually pushed my son into the world, and was finally convinced that pregnancy was not some kind of sick, endless joke.

I celebrate my laborversary because society works overtime to erase us moms and the unbelievably intense emotional and physical labor that goes into making the next generation. From the stork stories and all the other ways people lie about where babies come from, to all the talk of doctors and other care providers "delivering" babies (like they're the ones doing the hard work instead of us, and we're just waiting around for the baby we ordered on Eat24 or something), to the sneaky way women often become "So-and-so’s Mom" once our kids start becoming a bigger part of the community, there's a certain invisibility that comes with the work of motherhood if we're not careful to remember ourselves and assert who we are in addition to being mothers. (I can't even remember the last time a person asked me about myself and my interests, without first spending at least a few minutes asking me about my son. What's up with that?)

I love recalling and celebrating my son's birth story, because childbirth is the most challenging, most exciting thing I have ever done.

I celebrate because I'm still in awe of my body, and I need the yearly reminder to take a moment to remember and appreciate how profoundly strong it is, how strong I am. The same body I walk around in every day, that I too often take for granted, made, birthed, and nourishes a person. It is still doing all the work needed to be prepared, at any moment, to do all of that again if I so choose. That means I need to rest it and care for it and feed it, responsibilities I don't always take as seriously as I should. I try, but I fail, a lot. Yet my body hasn't failed me or my family so far. My laborversary has become another reminder to recommit to myself, so that I can continue working on behalf of others.

I celebrate because I never wanted the experience of giving birth to be something to be forgotten as soon as my child was born. For me, carving out a special time to honor it is an important way to keep that memory alive, and to honor my own contributions to my son's life without detracting from the next day's celebration of him and who he continues to become. I observe all the other major accomplishments and cherished moments in my and my family's life; birthdays, anniversaries, graduations, and more. I may have had to invent my own clunky term for it, but I feel pretty strongly about celebrating the hard work I did to bring my son into the world, because that's an important accomplishment, too.