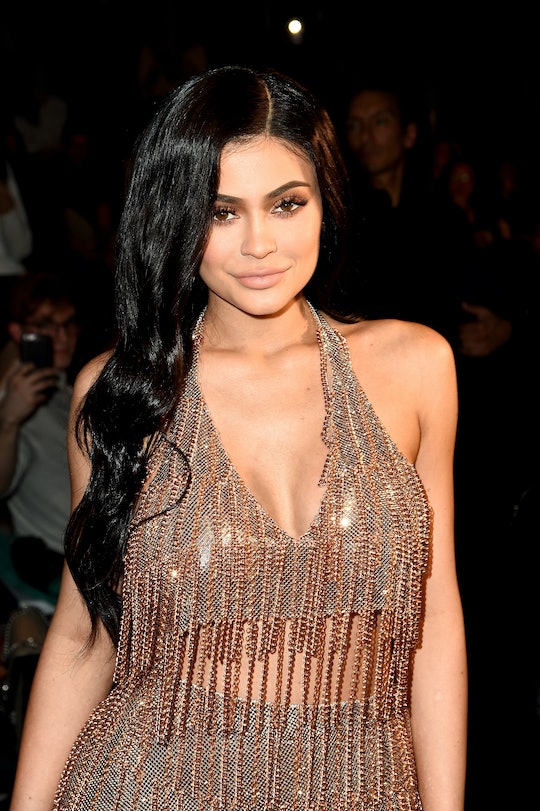 This *Could* Be How Kylie Jenner Will Reveal Her Rumored Pregnancy

For people like me following the Kardashian-Jenner family, it's been a wild past few months. After the Great Christmas Letdown of 2017, in which Kylie Jenner didn't appear on the family's Christmas card at all, let alone with a pregnancy bump, fans are sort of left just waiting for the 20-year-old to let us in on the details of her life. Yes, I know how out of control that sounds, since her uterus is none of my, or anyone's business. Yet, I can't help but wonder if Kylie Jenner will reveal her pregnancy in Love magazine or not and here's why.

Just to be clear, I know this line of questioning is bordering on obsessive, but as I laid on the couch over the holiday, incessantly refreshing Kim Kardashian's Instagram and Twitter timelines for the last of the Christmas card pictures, it occurred to me that I should just check Kylie's page, too!

At first, I was sort of irritated that it was just a zoomed in teaser of her Love cover with the quote, "I was just trying to keep up with myself. All businesses, every company, makes little mistakes here and there. Growing it in front of so many people all of a sudden was kind of hard.” But then I became convinced that this, and not the Christmas card, would be the big reveal.

Love is a bi-annual British style magazine, which is a perfect place for her to reveal any number of things about her life, since she could use a non-tabloid way to do it, especially since she's been sort of out of the spotlight. At least when it comes to her family's show, Christmas card, and her own social media accounts.

It's also not exactly going to be a hard-hitting exposé into all things Kylie: the photos are done by her big sister Kendall, which she's totally used to. The two younger sisters grew up making their own music videos and photo shoots, so this was probably just another fun thing to do together.

The interview was conducted and then written by her mom, Kris Jenner, so that, too, is a super safe space. Kris is protective of all of her daughters and especially her "favorites," Kim and Kylie, as the family's joked about all season this year on Keeping Up With The Kardashians.

So it's an appearance by Kylie and they're keeping it all in the family. It would be as good a time as any to spill the beans and confirm or deny the news. Given Kylie's motto of "it's better to confront the rumors than let them get out of hand" and her well-known struggles with shyness and anxiety, this would be the calmest way to do it.

Then again, this could just be another letdown. At this point, even I'm starting to think that maybe, just maaaaybe, the anonymous sources that speak to celeb news outlets might have been wrong and that in trying to cover up Khloé's pregnancy, Kylie was somehow implicated and now it's turned into too big of a thing to tackle.

Maybe her self-imposed exile from the paparazzi's view and Snapchat has to do with work or her mental health? Remember that quote from the Instagram teaser for this cover? "I was just trying to keep up with myself. All businesses, every company, makes little mistakes here and there. Growing it in front of so many people all of a sudden was kind of hard?"

It could be that this Love article is all about growing her cosmetics company, the missteps she made along the way, and how she handled spending the majority of her life in the public eye. At this point though, I'll take any news at all. Because keeping up with the Kylie pregnancy reveal theories is just getting to be too much work.