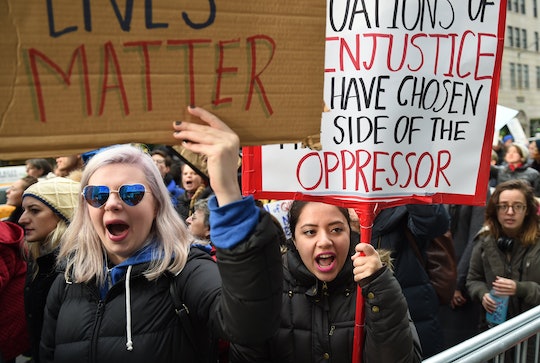 Will 2018 See Another Epic Women's March?

President-elect Donald Trump will be sworn in on Friday as president, but there are hundreds of thousands of women that are expected to march on Washington the very next morning — and in sister marches across the nation — to make their voices heard. Given the divisive nature of this election, it can be hard to tell what the Women's March is all about, and if Trump stays in office, will there be a Women's March in 2018 and years to come? That kind of depends.

The march was organized, as things are these days, on social media. As the election results came in Nov. 9, two women, who didn't know each other, each created a Facebook group dedicated to march in Washington to protest the Republican win. Soon after, those two women joined forces, along with others who wanted to help the cause, to organize what is now some 200,000 "interested" women and men who want to walk in D.C. and many more taking part in marches across the country (and worldwide) in solidarity on Trump's first day in office.

The march isn't exactly anti-Trump, it's more anti-everything Trump allegedly campaigned for. It's against isolationist socio-economic policies, against the "de-funding" of Planned Parenthood. It's against racism, climate change deniers, and those that think sexual assault can be spun as a joke.

The march is literally about all of the issues that boiled up during the contentious 2016 election cycle, and so it's hard to gauge whether the movement of women will fizzle out by the time 2018 rolls around or be even stronger. At first, there were complaints that the two women who organized it were white women, and that the "movement" was leaving out other, more marginalized populations. Or, some complained, that the march was "just about feminism," when there are so many other fights to fight. But as we all know now, women's rights are human's rights, and the organizing committee of the Women's March quickly adopted a message of intersectional feminism to counter detractors.

Anyone cane come, even if you voted for Trump but are worried about, say, healthcare or water safety. There's a place for everyone at the march in D.C. and those happening across the country this weekend.

We believe Gender Justice is Racial Justice is Economic Justice. We must create a society in which women, in particular women ― in particular Black women, Native women, poor women, immigrant women, Muslim women, and queer and trans women ― are free and able to care for and nurture their families, however they are formed, in safe and healthy environments free from structural impediments.

As of right now, there are no concrete plans for a Women's March on Washington next year (at least one organized by this group, as other women's groups have marched years past, most notably the Million Woman March in 1997, in Philadelphia) — everyone is still too busy gathering their clear fanny packs and trying to find out if there are places to pump on the march route (spoiler alert: there are) for this year's march. But if the incoming administration doesn't address or walk back some of the radical anti-feminist policies and ideas that they ran on during the 2016 election, it's likely that women will still be ready to march for their own, and everyone else's, civil and human rights going forward.