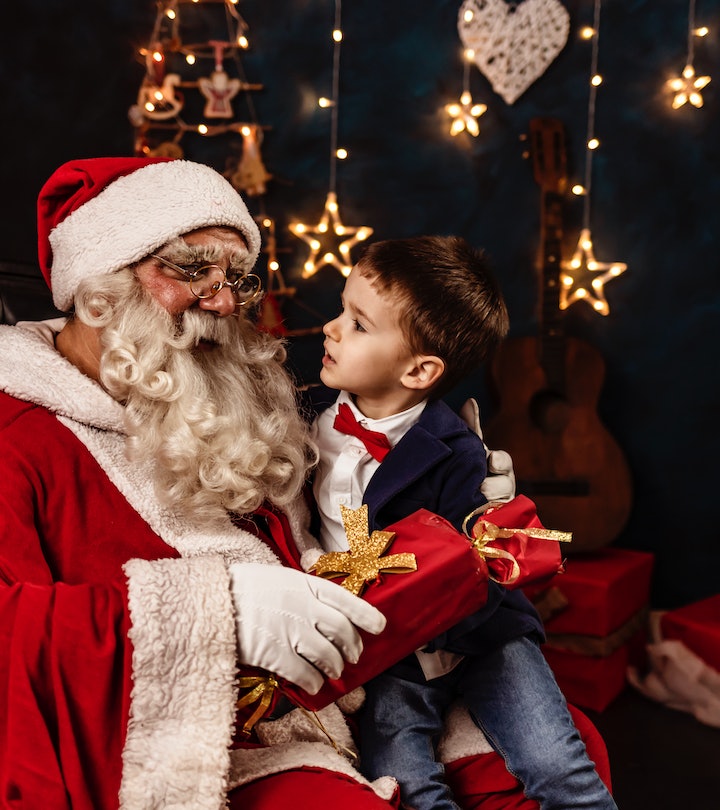 This Is Your Kid's Brain On Santa, According To Experts

He knows if they’ve been bad or good.

Santa’s a bit of a controversial figure these days. While many children and families see Santa as someone fun and kind who brings gifts and cheer to the world, others view the mythical being as a lie that causes little ones to grow up with trust issues. And still others see him as another white male we’re forcing children to obey — which, okay, point taken. Despite this, plenty of families (including my own) continue to introduce their young children to Santa from an early age — either because they have positive, nostalgic feelings from their own childhoods, or because they want to instill a bit of magic and excitement into their own child’s lives. But I know I’m not alone when I wonder how exactly believing in Santa affects my kid’s brain. Is it all in good, nostalgic fun the way I mean for it to be, or am I ruining my child psychologically in some way?

To answer all my questions regarding Santa’s influence over growing young minds, I turned to two experts: Dr. Bethany Cook, a Licensed Clinical Psychologist, mother of two, and author of For What It’s Worth: A Perspective on How to Thrive and Survive Parenting Ages 0-2, and Dr. Tim Jeider, a Double Board Certified General and Child & Adolescent Psychiatrist from Nevada Mental Health.

Now, believers of Santa are fairly young — not surprising considering the mental gymnastics required to believe he sneaks into every single person’s house in just one night.

“Most kids believe in Santa Claus until they are around 7-10 years old,” says Dr. Cook, though she adds that kids who have older siblings or others who might explain that Santa isn’t real often stop believing much sooner.

And while you might think there’s no way kids actually believe, Dr. Cook says on the whole they believe what they’re told.

“Unless a parent has blatantly said ‘Santa isn’t a real dude’ most children believe he is of flesh and bone like them,” says Dr. Cook.

So how does Santa affect a child psychologically?

"It is a natural part of child development to have an imaginative thought process. So believing in Santa Claus fits perfectly with normal child development and a child’s ability to believe in the make-believe," says Dr. Jeider.

In fact, there’s a lot of mental and social-emotional positives to keeping up the seasonal ruse. According to Dr. Jeider, if you’re creating a positive and nurturing environment around Santa and the holidays, you’re likely simply creating positive childhood memories.

Moreover, Dr. Cook says believing in Santa teaches a child that they can believe in intangible things.

That doesn’t mean you should use it as leverage. Both Dr. Jeider and Dr. Cook agree that the only negative about sharing Santa with kids is if you use it more to threaten against bad behavior, which makes it less fun and more stressful.

“He isn’t a hallway monitor,” warns Dr. Cook. If you present him as such, Dr. Cook warns there’s a risk of Santa becoming “another authority figure watching them 24/7 and focusing on all their bad behaviors.”

As for the critique against the preponderance of white Santas over others, Dr. Cook had this to share:

“A child of color who believes in a white Santa may feel less ‘seen’ or understood by (them). Some children may fear they won’t get treated the same as other children when they see a white Santa because their lived experiences have told them white people treat children of color differently in negative ways,” says Dr. Cook. So how do you challenge that?

To normalize Santa not always being an old white man, Dr. Cook says, “it’s important for a young child to see images and pictures of all types of Santas.”

Is Believing in Santa Bad for Kids?

So really, are there any other potential negative ways Santa affects kids' brains?

“The biggest challenge with a child believing in Santa is how you process the news that Santa isn't a real person,” says Dr. Cook.

Dr. Jeider advises parents to follow the lead of their child. Keep up the make-believe as long as kids are enjoying it.

“If they’re starting to doubt or are showing distress over incongruencies, have a more honest conversation with them. There’s no real wrong answer as long as you follow good intentions and are mindful of your child’s emotional response to what’s going on," says Dr, Jeider.

So there you have it. Your kid’s brain won’t turn into a fried or scrambled egg on Santa. In fact, so long as you don’t leverage it against bad behavior, provide some diverse examples of Santa, and know when to come clean on the fantasy, it might even help them enjoy the holiday just a bit more.

Dr. Bethany Cook, a Licensed Clinical Psychologist, mother of two, and author of For What It’s Worth: A Perspective on How to Thrive and Survive Parenting Ages 0-2