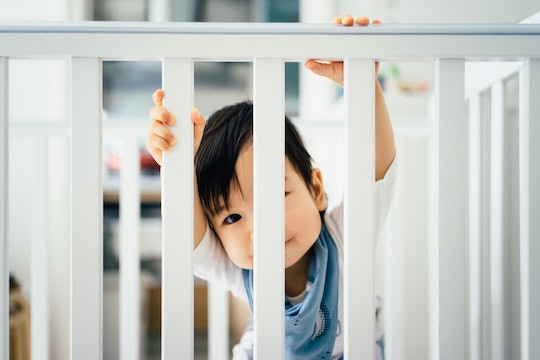 Sometimes parenting can feel like a never-ending attempt to keep your kids from injuring themselves, despite their seemingly innate ability to find trouble in even the safest of spaces. Just when you think you have it under control, your baby starts rolling, crawling, pulling themselves up, and getting into everything. Before you know it, danger is all around you once again. Babies are particularly known for always sticking their arms and legs through crib bars, which makes parents relentlessly worry about them at night, afraid that at any moment they might hear their little one cry out in pain. If you’re wondering how to keep your baby from sticking their legs through a crib, the advice of medical experts is actually quite simple.

If you are worried about your infant sticking their limbs through crib bars, getting stuck, and hurting themselves, you might think to turn to crib bumpers and liners, which line the shelves of many baby stores. However, medical and child safety experts say this is a bad idea. “As pediatricians, we strongly advise against using either,” Dr. Sami, M.D. and Dr. Ana, D.O., the pediatricians behind the social media platform The PediPals (who asked to be referred to by their first names for safety reasons), tell Romper. “Using bumpers and liners is a more dated practice that we have learned a lot about.”

Here’s what parents should know about why crib bumper and liners aren’t the best choice, as well as how to keep babies from sticking their legs through cribs to make sure they sleep safely.

Are crib bumpers and liners safe?

If you are confused about the recommendation to avoid using crib bumpers and liners, you aren't alone. It seems like every baby aisle in every store contains products like crib bumpers and other devices that attach to the sides or slats of a crib, all of which are supposed to keep babies safe and cozy. And more than that, there always seem to be new products that claim to be the latest and greatest thing out there. However, despite many manufacturers' claims, not everything is vetted by medical experts as safe to use.

“Unfortunately, the baby industry is a highly prolific and very lucrative market — oftentimes, many products have not been studied for safety or efficacy and are unregulated,” Drs. Ana and Sami say. “It can be such a confusing world to navigate for parents, and we understand how overwhelming this can be. This is why we always recommend reaching out to your pediatrician for advice on what to use and what to avoid, as well as to check what is safe to use at what age for your child.”

Marketed to reduce injury and minor bumps, crib bumpers and liners have been shown to provide no difference in preventing crib falls or climb-outs than cribs with no barriers, according to a 2019 study published in the Maternal and Child Health Journal. In fact, they were actually found to pose a greater risk of injury or even death for babies.

A 2016 study published in The Journal of Pediatrics indicated that crib bumpers caused an increased number of deaths and injuries in recent years when infants suffocated, became trapped, or accidentally choked on bumper ties. In response to the study, the American Academy of Pediatrics (AAP) called for a federal ban on crib bumpers in an attempt not only to save infant lives, but also to make things less confusing for new parents, who might understandably think that if a product is sold in stores, it is automatically safe.

But should you be worried that your baby will get hurt if they stick their arms or legs between the crib slats, especially if you're not covering up those slats with an in-store product? Drs. Sami and Ana, along with the AAP, say no. As it turns out, the risk of injury from crib bars is pretty small. “In general, cribs that meet CPSC (U.S. Consumer Product Safety Commission) standards, like most new cribs, are made to have small spaces between slats to minimize the chance of your baby’s limbs from getting stuck,” Drs. Ana and Sami say. “Though it can happen, the majority of these occurrences are typically minor and do not cause serious injury or fracture. Most of the time, it is just uncomfortable for your baby.”

Out of the 10,000 children taken to an emergency room each year, around 80% are for crib-related injuries, but only 6% of those injuries result from a child becoming caught or wedged in the crib, according to a 2011 study published in the journal Pediatrics that examined data across a 19-year period. When injuries do occur, they are typically minor and happen to children who are too old to be using bumpers, anyway. Additionally, newer crib standards require that bars be placed closer together, which lowers the risk of serious injury.

When it comes to safe sleep guidelines for infants, Drs. Sami and Ana explain that the safest place for a baby to sleep is on their backs and on a separate flat sleep surface designed for infants, such as a crib or bassinet. “We do not recommend using anything besides a firm mattress for safe sleeping in babies,” they say. “The mattress itself should be firm enough not to indent when your baby is placed on it.”

That also means that there shouldn’t be any pillows, blankets, stuffed animals or other soft toys, or loose bedding in the baby’s sleeping area — and definitely no crib liner or bumpers that are not secured to the perimeter. “These extra objects in the crib or sleep area can be hazards that can increase the chance of suffocation, strangulation, and Sudden Infant Death Syndrome (SIDS) in babies,” Drs. Ana and Sami say.

Placing your baby to sleep on their back, even for naps, is also essential. “This makes sure your baby does not roll over in a position that blocks their airway and also prevents spit-up from going down the wrong pipe to irritate their lungs or cause them to choke,” Drs. Sami and Ana say. “If your baby rolls over, place them back on their back until your baby is able to roll both ways.” Parents should also steer clear of letting infants sleep in car seats, strollers, slings, loungers, nursing pillows, couches, or sofas, as they can compromise their airway.

What to do if Baby gets stuck

To prevent your baby from sticking their arms and legs through the crib, specifically, Drs. Sami and Ana have some recommendations. “Try to use a crib that does not have cut-outs,” they say. “Make sure the mattress fits snugly to prevent any limbs from getting caught in between the mattress and the side of the crib.” Ensuring that your crib meets CPSC safety standards also makes sure the space between bars is the optimal size to prevent your child’s head, neck, or body from getting stuck.

Should your baby get a little wedged in their crib, it likely won’t be a major issue to resolve. “If they do get their arm or leg stuck, gently help them get unstuck (which may involve taking out a slate and putting it back in) and comfort them till they are soothed,” Drs. Sami and Ana say.

So, what's a worried parent to do? The answer is use a vetted crib and firm mattress, take apart your baby's crib if they get stuck, and kiss their bumps and bruises when they inevitably happen.

More Like This
The FDA Is Warning Parents To Not Use Baby Neck Floats After One Infant Died
Can You Light Fireworks In Your Backyard?
Here's Why Wearing Long Sleeves In The Summer Can Be Good For Your Baby
How To Breastfeed A Baby With A Cleft Lip Or Cleft Palate

This article was originally published on July 14, 2017