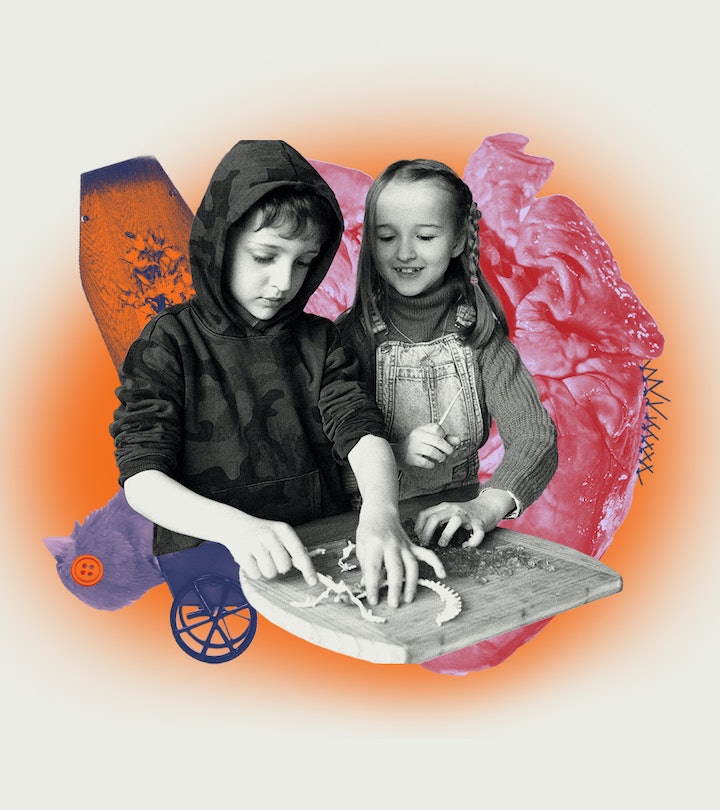 Is Your Kid’s Obsession With Death & Gore Normal?

There's a pretty logical reason why so many little kids are obsessed with death, actually.

“Hey mom, can we go to the place where the dead-ed bodies are rotting under the stones and walk around?” Rather than the opening of a Halloween movie, this is something my 4-year-old asks regularly. I was worried that I might one day be watching a Netflix true crime documentary about my own child, but it turns out that it’s normal for little kids to be curious about death and gore — or even obsessed with it. In fact, around age 3 or 4 is when kids first begin to understand death

Why around this age? Preschoolers are finally aware that bodies have parts that make them run, and eventually, these parts stop working. As they flip through lift-the-flap books with diagrams of organs or play in a “body” exhibit at the local science center, the abstract qualities of life become more concrete. They begin to notice roadkill, cemeteries, or the guts of a squished bug on the sidewalk. As their little wheels begin to turn and they have their first brush with mortality, this realization often translates into a creepy-but-normal interest in death. Sometimes that manifests as toting around a creepy toy everywhere or a year-round love of Halloween. Sometimes, though, it manifests as an actual obsession with death itself. That’s not as concerning as you might think, though.

Kids learn through obsessions, even ones about death and gore.

Whether a child is super fixated on construction trucks or internal organs, the developmental reasoning is the same. Young kids learn through repetition or fixations. (Actually, adults still do this too, sometimes. Ever taken a deep dive into felting or sourdough bread?) “It is normal, natural, and healthy for a child to be fascinated, curious, and filled with wondering about death or any other topic, whether or not they have personally experienced it close up,” says Dr. Donna Schuurman, the Senior Director of Advocacy and Education at Dougy Center: The National Grief Center for Children & Families.

Rather than an “obsession,” though, Schuurman encourages parents to think of their current interests as something children are merely trying to learn more about. “Is a child who talks about when people die, expresses curiosity about dead bodies, and wonders what it feels like when you die obsessed with death, or simply sharing a natural strong desire to better understand the role death has in life?” So when my youngest asked her grandmother for a frog preserved in formaldehyde and a scalpel for her birthday, Schuurman assures me that it is likely unconcerning. (Yes, of course, my mom bought her this gift, because grandmothers are extra.)

Kids are comfortable talking about death.

Most of the uncomfortable feelings surrounding death and dying come from adults, actually. Schuurman encourages parents to examine their own emotions. When my child finds a dead mouse and wants to flip it over with a stick to see its guts, I need to check my feelings. “Is the child’s fascination and questions about death troubling to a parent or other adults, or is it truly interfering with the child’s daily life and development?” Schuurman asks us. “Death can be an uncomfortable topic, and a lot of adults prefer to switch the topic or ‘protect’ their children from hard conversations,” when we actually should be encouraging the conversation.

Kids are paying attention to how we handle these conversations about death and gore, says Dr. Gauri Khurana. As a psychiatrist for kids and adults, she’s heard the gamut of parental concerns around seemingly odd topics. “They are trying to make sense of the world, and do not have much of a concept of permanence, especially in relation to people and mortality. Their parent's feelings about death often transfer to their children. Remember, children are like sponges.” It’s OK to indulge their curiosity, she says.

It’s pretty typical for these death curiosities to take center stage each fall, as decor and themes revolve around death and gore in a very noticeable way. “Halloween is a normal extension to playing that out with their costume choice and asking lots of questions about ghosts, goblins, and skeletons, and dressing up like them are attempts to understand the idea of death,” says Khurana. So, if your kid — like mine — wants to be a “very, very dead ballerina with dripping blood” for her pre-K party, let her. It’s all part of the learning process.

Schuurman also tells us that honesty is the best policy. While we can be tempted to replace a dead goldfish before the kids notice or make up a whimsical story about a dead pet floating up to a star, it’s really healthier to just be honest. “Answering their questions as truthfully as possible, without overloading with adult explanations, will help them know you can be trusted with any topic and that you’ll answer honestly — even if that answer is ‘I don’t know.’” Often these smaller touches with death, from a pet to a wild animal, prepare kids in some ways for the eventual loss of a human loved one.

Can kids be too obsessed with death?

Like everything in life, moderation is key. While it is absolutely normal for little kids to be super into dead things, they can reach a point where parents might want to seek professional help. At the Dougy Center, Schuurman and her colleagues work with kids who have experienced death and loss. “If any topic or interest is interfering with their health or life, that would be of concern.” Sometimes this intense interest is spurred by a loss in their family, and sometimes it can come out of the blue.

The Dougy Center has a list of resources for kids struggling to understand death. Dr. Khurana adds that behavior in particular is something to keep an eye on. While talking about death and even exploring dead animals is quite typical, there is a line. “The degree to which the child is interested or involved with the macabre determines if a child would benefit from professional help,” she says. “Asking questions, wondering about the process [of dying] and what happens afterward is normal. Wanting to kill animals to understand it or repeatedly wishing that family members die would warrant assistance from a professional.” Both professionals tell Romper that it’s likely your kid is choosing a completely developmentally normal method to understand a complex subject, but it’s always good to be on top of potential concerns.

The bottom line is this: Let your kids poke at the dead mouse, wander the cemetery, or spend hours with a see-through human body model. Chances are, they will one day be a normal adult watching Netflix crime docs with you, rather than starring in one.