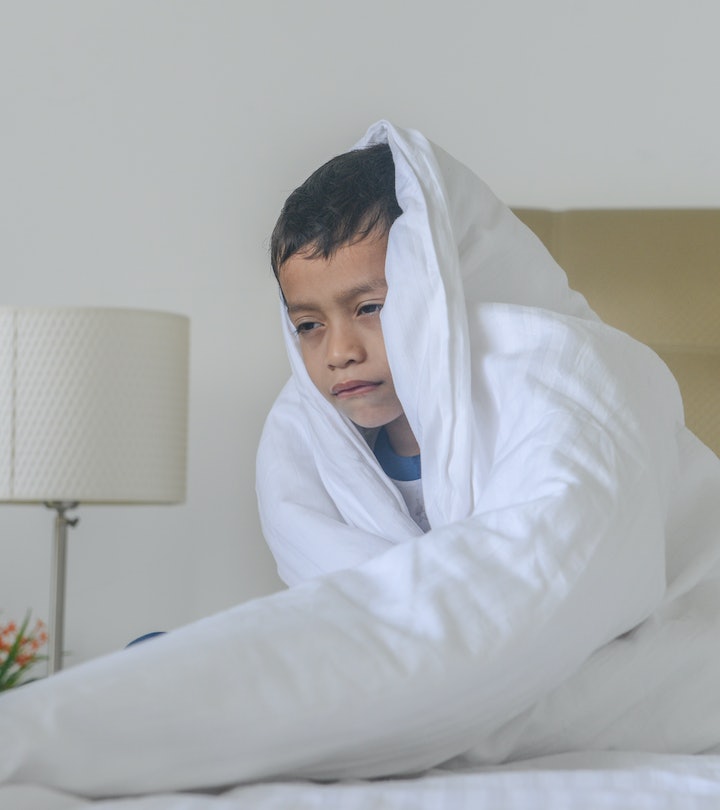 When Your Kid Is Puking Straight Phlegm (Ugh), Here's What You Need To Know

It’s so gross, but there’s no need to panic.

As nauseating as it is, dealing with snot or vomit when your kid is sick is just part of the parenting process. Combining the two, though? It is absolutely gross, but sometimes that's exactly what happens when your sick kid pukes phlegm. It's decidedly disgusting, but what does it actually mean? Exactly how sick is your child when they're puking up straight phlegm?

What actually is phlegm, anyway?

"When kids have a cold, they produce mucous; some runs down their face, some they blow into a tissue. The mucous produced by cells in the lower airway and lungs is thicker and referred to as phlegm. Phlegm is full of infection-fighting cells and enzymes to help fight against illness," pediatrician Natasha Burgert tells Romper.

So, phlegm is basically thick mucous that develops during respiratory sickness. That makes plenty of sense, but why the puking? How does it get from the lungs and airway and out into the toilet, bucket, or trash can (hopefully) that your child is vomiting into? (Ha, we all know where it really goes. Right in the middle of your own bed.)

Why do little kids throw up phlegm?

"Often times, young kids don't know how or can't effectively blow their nose, and lots of mucus may pool in throat and/or be swallowed," Dr. Jennifer Trachtenberg, a pediatrician and American Academy of Pediatrics SpokesDoctor, tells Romper. "The excess mucus may irritate the stomach or be in the throat causing a child to spit up the phlegm. Also, a long or hard coughing bout may cause a child to vomit as well."

As gross as it may be, this phenomenon doesn't only occur in children, Burgert explains, and a full stomach on top of too much swallowed phlegm is a recipe for disaster.

"During respiratory illnesses, kids swallow [phlegm]. (Adults do too, we just don't talk about it as much...) Phlegm can easily pass through the digestive system, but sometimes there is simply so much of it that kids develop nausea and throw it up," Burgert explains. "Alternatively, a young child may have lots of mucous in their belly and then feed a large amount, causing the child to vomit because the stomach is overfilled."

When To Call The Doctor If Your Kid Is Puking Phlegm

Trachtenberg notes that puking phlegm is pretty par for the course for kids during a respiratory illness. "It is usually not dangerous to spit up phlegm — in fact, kids may feel better when the throat is cleared."

Rarely, throwing up phlegm can be cause for concern, but other symptoms will usually exist alongside the phlegmy puke. If there's blood present or your child has difficulty swallowing or breathing, Trachtenberg says you'll want to see a pediatrician.

Burgert also cites dehydration from vomiting as a reason to make the call to your kid's doctor. "Repeated bouts of vomiting, concern for dehydration, or vomiting phlegm when a child does not appear to have a respiratory illness could be reasons to call the pediatrician. If the phlegm appears black or red in color, I would give a call, too," she tells Romper.

How To Help When Your Kid Pukes Phlegm

In the midst of cold and flu season with kids, or during a bout of Covid, you may have to deal with more bodily fluids than you ever wanted to experience in your whole lifetime, and that can include the dreaded phlegm vomit. This unfortunate side effect of sickness can rear its ugly head at anytime, so it makes sense that you want to be as prepared as you can be, which means helping your kids get their phlegm out before it gets to their stomach.

"Vomiting is a natural and expected response when a child's stomach is full of mucous. Using a nasal aspirator with young children and teaching toddlers to blow their nose may help decrease some vomiting events," Burgert tells Romper. "When a child is sick, offering small amounts of food and liquid more frequently throughout the day may help as well."

As disgusting as it is, sometimes sickness happens and puking phlegm is basically inevitable. But knowing what you're dealing with can make this gross occurrence just a bit more bearable.

More Like This
The Covid Vaccine For Kids Under 5 Has Been Sent To The FDA For Review
30 Easy Summer Activities For Kids That Work Rain Or Shine
Should Parents Consider Delaying Covid Vaccines Until Closer To School Starting?
15 Fun & Historical 4th Of July Facts To Share With Your Kids

This article was originally published on Feb. 11, 2020