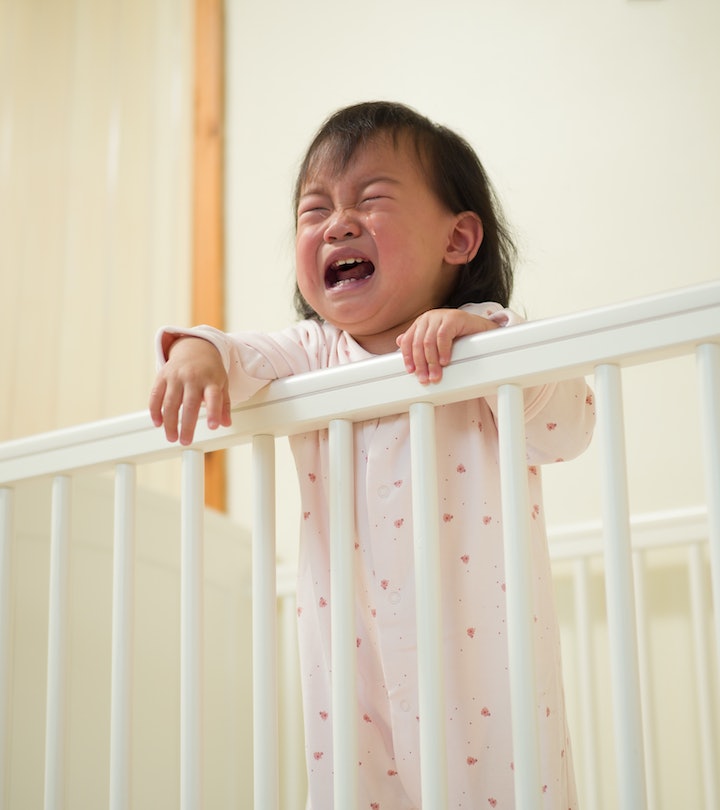 Nap time is supposed to be a much needed mid-day break for your kiddo, and for you, to rest and refresh for the remainder of the day ahead. But with one loud screech, the second half of the day can start out a little rocky, to say the least. So why do toddlers wake up from naps crying? There can be a number of reasons for this, some of which you might be able to help control.

Why do toddlers wake up from naps crying?

On average, between the ages of 1 and 3 years old, "most children will sleep anywhere from 8 to 12 hours overnight," Amy Liu, M.D., M.P.H., tells Romper. This means that their daily nap(s) should make up for the remaining hours of sleep they didn't get the night before. As the American Academy of Sleep explained, kids who are 1 to 2 years old should get around 11 to 14 hours of sleep in a 24-hour period, and kids age 3 to 5 years old should get around 10 to 13 hours. Whitney Casares, M.D., M.P.H., and author, says that "many 2-year-olds nap about two hours a day and many 3-year-olds nap about one hour a day." If your tot isn't getting the hours of sleep they need, that could be a possible reason for their nap-time behavior. "Under-slept children get very fussy and cranky, much like under-slept adults," pediatrician and author David L. Hill, M.D., tells Romper.

If you're sure your little one is getting the sleep they need, there are other potential explanations. One possibility could be external factors such as "discomfort (room temperature, infections, teething to name a few) or anxiety, fear, or stress (changes — starting school, new caretaker, potty training)," says Liu. Likewise, it could be that they "have an unmet need [like] a wet or dirty diaper, thirst... [or] they may want attention or reassurance that a parent is still around," says Hill.

Another reason for the crying, according to Liu, could be "confusional arousals." She says these "typically occur a few hours after sleep or when you wake up a child who is sleeping. They will wake up, moan, cry, appear distressed and inconsolable for up to 30 minutes." It's also likely that your child isn't getting the quality sleep they need (at night and/or during naps), which can have a snowball effect. If your child has a poor night's sleep, it can make them more tired the next day and cause problems with their naps. "When children are overtired or under stress, sleep disturbances are more likely," says Casares, whether that shows up in naps or overnight sleep.

How can you stop your toddler from waking up from naps screaming?

To promote quality, undisturbed, sleep, Liu suggests parents "adhere to a consistent routine" including "regular wake times, meal times, nap times, and bedtimes." Kids' behavior is heavily influenced by routines, including their wake-up routine. "Whatever you do to help your child sleep becomes a 'sleep association,' a habit that children become dependent on to help them sleep," says Hill. So, if you run into your child's room any time they cry at night, they will expect you to do the same when they wake up at nap time. To combat this, try to let your child cry a little while before running into their room at night and see if it changes their behavior during the day.

Like most things with little kids, you can follow all of the routines, set the temperature just right, help them sleep soundly every night and they may still insist on behaving the way they want. Liu notes, "if these events occurs too frequently, there are safety concerns, associated abnormal movements, or impacts on behavior/daytime sleepiness... consider talking to your pediatrician." But, if your child seems otherwise healthy and adjusted, the best thing you can do is just try to ride it out until the phase starts to fade.

David L. Hill, M.D., FAAP, spokesperson for the American Academy of Pediatrics and author of Co-Parenting Through Separation and Divorce: Putting Your Children First

Amy Liu, M.D., M.P.H., assistant professor in the Department of General Pediatrics and Adolescent Medicine at the University of North Carolina School of Medicine

More Like This
Should You Be Giving Your Toddler Melatonin To Help Them Sleep?
Here's When Your Baby Might Start Sleeping Through The Night For Real
These Stepmother's Day Instagram Captions Are Straight From The Heart
Stepmom Quotes & Sayings For Every Occasion

This article was originally published on April 6, 2020