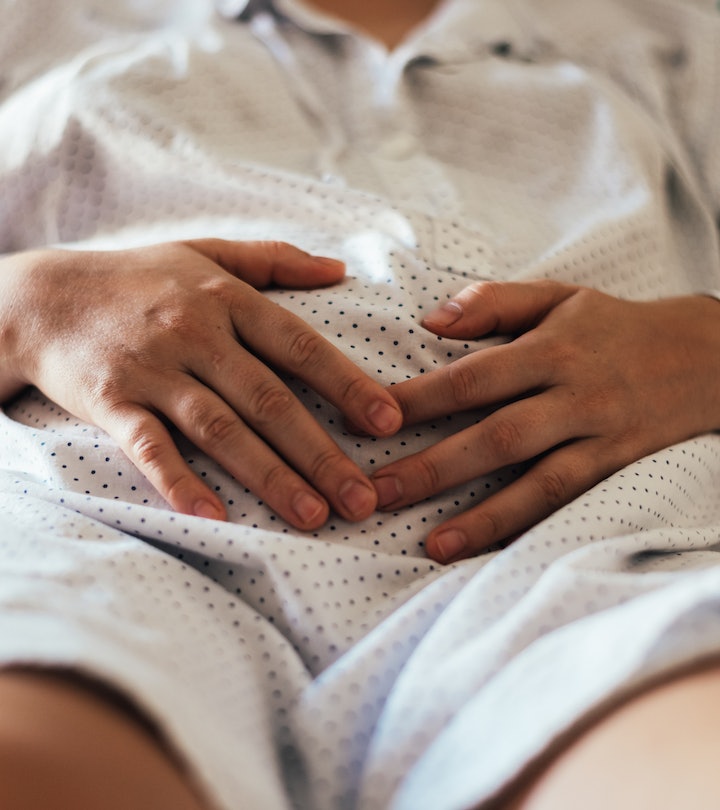 Yes, You Can Have A Miscarriage Without Bleeding

But it is rare.

In the earliest days of each of my pregnancies, I checked my underwear for any sign of blood every time I went to the bathroom. Worried about having a miscarriage, I knew bright red could be a sign of pregnancy loss, but was unaware that other signs of miscarriage may appear first. Questions about a pregnancy’s viability are common, especially in the first trimester, and especially before you’ve had your first ultrasound. Knowing whether or not you can have a miscarriage without bleeding can help you understand when to seek medical attention.

What is a miscarriage?

Put simply, a miscarriage is the spontaneous loss of a pregnancy prior to 20 weeks gestation.

Some early miscarriages may also be referred to as a ‘chemical pregnancy’ — though some people feel that term is inappropriate — if there’s a positive home pregnancy test, but repeat tests are negative, says Dr. Joey England, OB-GYN and maternal-fetal medicine specialist at the Woman’s Hospital of Texas. In other instances of miscarriage, a fetal heartbeat may be detected on an ultrasound, but ceases prior to subsequent follow-up visits.

The caveat here is that “miscarriage” and “pregnancy loss” are often used in the most general of terms by people in day-to-day life. When it comes to the question of whether or not a miscarriage can happen without bleeding, the terms get a bit more technical.

“‘Miscarriage’ is defined as the expulsion of the fetus from the womb before it is able to survive independent from the mother,” Dr. Kecia Gathier, a double-board certified physician in OB-GYN and maternal fetal medicine, and Director of Perinatal Services/Maternal Fetal Medicine at NYC Health + Hospitals/Lincoln, tells Romper. “With expulsion from the womb, there is bleeding.”

In contrast, the terms “missed abortion” or “blighted ovum” are a more technical way to refer to a pregnancy that has not developed normally and will not be viable, but bleeding is not yet present, according to Gathier. “This condition may not present initially with bleeding, and can be diagnosed via laboratory testing in conjunction with sonogram,” Gathier says. “These non-viable pregnancies generally ultimately result in spontaneous expulsion from the womb, vs. medically or surgically intervening resulting in expulsion.”

Signs of a miscarriage

A miscarriage is typically diagnosed by a combination of blood tests, physical exam, and an ultrasound, but there are a few signs of miscarriage that are pretty tell-tale.

Possible signs of a miscarriage include:

Some people will experience a combination of symptoms, while others may not experience any at all. If you’re worried that you may be having a miscarriage, contact your health care provider.

Can you have a miscarriage without bleeding?

“It is possible to not experience any symptoms during a miscarriage which makes prenatal visits essential to follow the health of the mother and baby,” England tells Romper.

Just as every person is different, the signs that someone is having a miscarriage can vary from person to person. A ‘chemical pregnancy’ can happen as early as 4-5 weeks gestation and may not present with bleeding. Any bleeding that follows a chemical pregnancy may simply mimic a long, heavy period.

Additionally, in cases of a blighted ovum or missed abortion, some people who experience non-viable pregnancies may not have bleeding from a miscarriage.

“The average physical recovery time from a miscarriage is usually several days however, bleeding or spotting can be ongoing or irregular for up to 4-6 weeks,” England tells Romper. However, England also notes that the emotional recovery can be an ongoing process that lasts much longer.

If you plan to try to get pregnant again, your provider may counsel you to continue taking prenatal vitamins during recovery from a miscarriage, according to England. “They can also undergo a preconception counseling visit prior to their next pregnancy,” she explains.

The recovery time after miscarriage varies from person to person, but the body will need time to heal, whether bleeding occurs or not. Taking time to grieve, rest, and recover after a miscarriage is an important, and very personal journey.

Joey England, M.D., OB-GYN and maternal-fetal medicine specialist on the medical staff of The Woman’s Hospital of Texas, part of HCA Houston Healthcare

More Like This
Pelvic Pain During Pregnancy: What Causes It & How To Deal With It
Yes, It’s Possible To Get Pregnant If You Have An IUD
7 Surprising Old Wives' Tales About Christmas Eve Babies
14 Free, Printable Birth Plan Templates For Every Kind Of Delivery