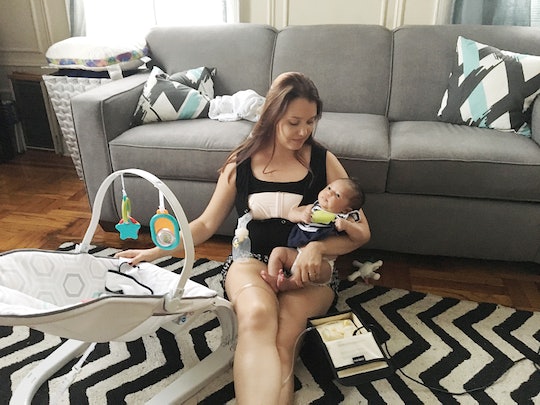 It was more work than I expected.

I sat in my midwife’s office during what I hoped would be my very last prenatal appointment. I had most of my crew with me: my 8-year-old son and my aunt, who was staying with us to help out with our older son whenever the baby decided to make her debut since my husband was at work. It was hot, sticky, August weather, so you can imagine my angst to just have this baby already. It was a Tuesday, my due date was approaching on Thursday, and we just couldn’t wait to meet the new little lady in our life. The week before, I'd already had my membranes stripped by my midwife, and since that didn't seem to have worked, I was eager to try out other ways to get things going, such as eating spicy foods or pumping to induce labor.

A week later, I was once again lying behind the curtain that separated my son and aunt from me, having yet another internal exam, only to be told that I was still only 1 centimeter dilated and about 60% effaced. These sounded like pretty good odds to me, but as I wiped more August sweat off my face, I found myself looking into my midwife’s eyes and asking, “What else can I do to help get things going?”

She smiled and assured me that things would move on their own time, but if I wanted, I could always try using a breast pump to induce labor.

“Ummm, come again? Use a breast pump to induce labor? I’ve never heard that before." My doctor told me, "Yes, it’s a real thing!" and advised, “Go home, get your breast pump out, which will also give you a chance to learn how it works, and use it for 15-minute intervals once an hour. The nipple stimulation will lead your body to start contracting, which will help get things going.”

“Hmmm," I said. "Interesting. Will anything come out?” She told me I'd see some colostrum come out, "but not a significant amount.”

Suddenly, I knew what I'd be busy doing for the rest of the night.

How successful is breast pumping to induce labor?

I'd spent many of my pregnant evenings scrolling through pregnancy and breastfeeding Facebook groups I was a part of and remembered a very heated discussion about using a breast pump during pregnancy. Everyone seemed to have an opinion, either saying that it was too dangerous or that it would help get labor going. Since I knew they were all just opinions from those who'd actually tried it, I decided to do the same and form my own conclusion about things — but not before doing some research.

According to medical experts, pumping to induce labor is all about that nipple stimulation. “Nipple stimulation can release a hormone called oxytocin,” Dr. Kameelah Phillips, M.D., board-certified OB/GYN and lactation consultant, tells Romper. “Oxytocin works on the uterus to stimulate contractions. Sometimes these contractions are sufficient enough to provoke labor.”

However, pumping to induce labor isn’t for everyone. As Phillip explains, how successful breast pumping is to induce labor will vary by person, and it is only safe to try if you are full term, meaning around 39 weeks pregnant. “We do not suggest trying nipple stimulation if you are not full term or not a candidate for a vaginal delivery,” she says.

Pumping nonstop became beyond frustrating for me because I had it instilled in my mind that this was it — this was going to be the thing that got labor going. And it just wasn't happening for me.

Obviously the goal here isn’t to produce milk, even though I can honestly say I was curious to see how much would come out (only little drops did, not even enough to save). For me, the goal when using a breast pump to induce labor was that enough nipple stimulation might naturally start contractions. So, I got home and opened my breast pump contraption out of its box for the first time.

How I tried breast pumping to induce labor

I started with the 15-minute intervals my doctor had advised, then rested for the rest of the hour before starting the process all over again. While I was pumping, I could definitely feel teeny, tiny contractions or something happening in the pit of my stomach as the pump sucked away at my nipples. But whatever was happening would immediately stop whenever I switched the “on” button back to “off.”

So, I got up the next day and tried it again. Still, there was nothing. I pumped, rested, washed (because everything needed to be washed before I started all over again), and pumped. Then I did it all over again. It became a vigorous cycle without any end in sight. Pumping nonstop became beyond frustrating for me because I had it instilled in my mind that this was it — this was going to be the thing that got labor going. And it just wasn't happening for me.

My due date approached two days after my prenatal appointment and quickly passed with no baby in sight. I went from pumping during huge chunks of time during the day to pumping very little, and then eventually stopped because it just wasn’t doing anything for me. That upcoming weekend, three days past my due date, I went into labor while watching a Jennifer Aniston movie. No breast pump needed. Apparently, my babies just like to hang out inside me extra long (my son arrived a week past his due date).

Moral of the story: While there is research to back up the theory that breast stimulation via an electric or hand-held breast pump helps some people go into labor quickly, it’s also definitely a case-by-case basis and not guaranteed to work for every soon-to-be parent who tries it out — as I figured out firsthand. Of course I was disappointed that it didn't work for me, but looking back I now realize that my daughter just wanted to come on her own time, and I needed to be OK with that, even if it wasn't in line with the schedule I had in mind. Everyone’s body is so very different that using a breast pump to induce labor is not a one-size-fits-all remedy. Sometimes (OK, most of the time) you just need to sit back and let Mother Nature do her thing.

If I ever have any more children down the road, personally, I think this is one labor-inducing action that I would permanently kick to the curb. It just wasn't worth the hassle for me, and even though those last days of pregnancy were agonizing, in my case, they were better spent getting any extra sleep I possibly could rather than stressing myself out. However, pumping to induce labor may be right for you — there’s no harm in checking with your doctor.

More Like This
Can Swimming Induce Labor? Experts Weigh In
This Is How Your Water Breaks During A C-Section
Pitocin Induction: What It Is & The Play-By-Play
Turns Out, You Can Dilate Pretty Far Before You Actually Go Into Labor

This article was originally published on March 9, 2017