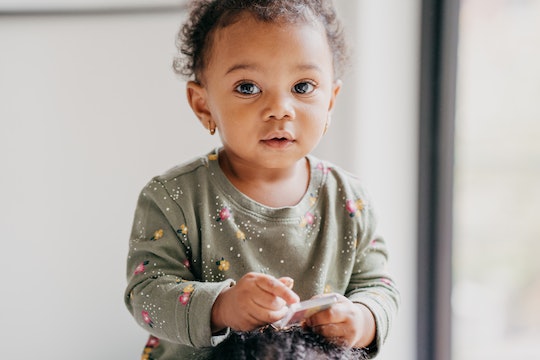 These 59 Southern Girl Names Are So Special

Why use one name when you can use two?

Southern baby girl names follow a few standards: 1) They’re often old fashioned, meaning they hearken back to less often heard traditional names. 2) They typically have a family connection. And 3) one name isn’t always enough. Hyphenated or double names are beloved in the South. Want to give your daughter one of the classic Southern baby girl names? Keep those three pro tips in mind.

Barring that, you can always go the last name route. Often Southerners will use a last name as a first name for a girl, pulling from the ancestral tree. And gender rarely needs to be a concern. Check census records for the South and you’ll find that following gender norms when naming babies isn’t an issue. Just look at girls named Tate, Cole, Evans, and Baker.

So while the South might be known for its strict traditions, when it comes to Southern baby girl names, creativity is key. The more creative the better, and if the name comes packed with meaning, then you’ve really nailed the Southern girl name game.

Grab any Southern church’s christening records and you’re likely to see many of the following names. They’re quintessential Southern titles for little girls.

Recall the phrase bonnie lass? Then you’re halfway to guessing the meaning behind Bonnie. From French and Scottish, it means pretty.

A longtime classic, Betsy shows up a lot in the South, a place that shrugs off trends in exchange for tradition. Derived from Hebrew, it means God is perfection.

The month of May is a beautiful time in the South, just before the heat of the summer sets in. Preserve that perfect season by giving the name to your baby girl.

Addison began as a boy’s name, Gaelic for son of Adam. But today it’s been popularized as a girl name and is a favorite in the South.

A common name for men as well, although without the ‘e’, Blaire comes from Scottish meaning “dweller of the plain.” For any flatlander raising a new babe, that might be appropriate.

Bea is often the nickname for Beatrix and means bringer of joy. That’s accurate for every baby, right?

Birdie has all kinds of country charm. Maybe that’s why it’s making a comeback.

Two words: Dolly Parton. If you love the legendary country queen, then by all means, name your baby after her.

Dixie is used to describe the states below the Mason-Dixon Line that divides the South from the North. But if you don’t want to get into all of that, just say you named her after Dixie Carter star of Designing Women.

Etta James famously sang “at last my love has come along.” That might be how you feel when you meet your baby for the first time, making this name highly appropriate.

It’s not only a Southern state, Georgia is a beloved Southern name. Just look through any Southern yearbook and you’ll see handfuls of Georgias for as long as they’ve been publishing them.

The capital of the state of Georgia, Savannah is a great name for any girl born in this state or another Southern one, for that matter.

If you like the name Francesca but feel it’ll be too formal for your little girl, opt for the playful Frankie instead.

Hattie McDaniel was the first African American woman to win an Academy Award for her role as Mammy in Gone with the Wind, a classic if controversial Southern film and a great woman to use as a role model for your own Hattie.

Dolly Parton sang about an infamous Jolene stealing her man. If you love the song, name your daughter after it.

JoEllen is one of those Southern names that sounds like a double name, but is actually one. In the French origin it means “Jehovah is God.”

In French, Lottie is a girl’s name meaning womanly. If that’s what your girly girl seems like then Lottie is the name for her.

Nellie means sun ray and for a Southern girl born on a hot summer day, she may seem like the ultimate ray of sunshine.

In France, Eleanora means light. So this is an abbreviated version of that.

The name Scarlette means red. If you have a little Southern redhead with the attitude of Scarlet O’Hara, this name will suit her just fine.

In German, Trudi means ruler of the spear! How’s that for empowering your baby girl?

Tilly also comes from German and means mighty in battle. Not too shabby for a name that sounds awfully sweet on the surface.

One of the original colonies, home to eight presidents, and a leader in South, Virginia is a proud state. If your girl was born there, this is a great way to grow her state pride.

Need a reason to name your girl Viola? Look no further than South Carolina native and Academy Award winner Viola Davis, the youngest actor and the first African-American to achieve the "Triple Crown of Acting" for her Academy Award, Emmy, and Two Tony awards!

Wilma has German, Scottish, and Swedish origin and means resolute protection. That’s a lot for a tiny baby girl’s shoulders, but you know she has the strength to carry it.

Vivian comes from the Latin name Vivianus meaning lively. Judging by how much she kicked in utero, this name might be just right for your baby girl.

What’s one name when you can use two? Southerns love giving boys and girls two names (plus a middle, naturally).

Ava Rose provides the best of two name meanings: Ava means lively while Rose is, well, one of the most beautiful flowers on the planet. Incidentally, roses are a Southern garden favorite, so the name is a perfect Southern baby girl name.

Laura comes from the bay laurel plant while Beth has a more religious meaning: “my God is bountiful.” It also has the classic Southern baby girl naming convention, three total syllables.

Pairing Anna with a second name is big in the South. And there are so many names to choose from. Take Grace, which means goodness and generosity.

Sometimes Southerners add a hyphen to double names, sometimes they don’t. If you want the hyphen Anna-Claire is a nice pairing.

Because of its Biblical status, Mary is a very common name. If you like it but want to personalize it, add a name like Helen which comes from Greek meaning torch or light.

Kate is another name that often shows up in Southern double monikers. With it’s one syllable sound it works well paired with another name like Emma, which in Hebrew means “my God has answered.”

Beth means God of abundance, which, if you’re very religious, might feel appropriate given the arrival of your new baby.

In German, Margaret means pearl, a lovely symbol for a sweet Southern girl.

The Latin origin of Celia is heaven. A heavenly May might be how that month feels when your baby arrives.

In the Bible, Sarah was the wife of the wise Abraham. While Catherine in French means pure. A pure noblewoman? Sounds like a great Southern, right?

Anna means grace or favor in Hebrew and Kate means pure. A gracefully pure girl? Not a bad combo.

Two of the most beautiful flowers surely deserve to be paired up. Especially if your Southern garden is full of them.

Another strong Biblical name, Ruth means friend. Who wouldn’t want their daughter to be a friend to all?

Jean can be a male or female name and means “Yahweh is gracious” in Hebrew. With Nora Arabic for light, the pairing makes an extra spiritual Southern name.

Ellie is generally short for Eleanor which means light. And Mae is just a different spelling of Mae, a nice way to differentiate your daughter from the crowd.

Whether it’s a family name you want to see carried on, or just a surname name you think makes a great first name, in the South people say by all means, use it!

Russell is a common last name that occasionally is given as a first name to boys. But in the South, you might just come across a woman named Russell. Derived from the Old Norse word, rus, for red, it’s commonly linked to being red-haired. If you have a ginger gal, this is a great Southern baby girl name.

It’s said that in Old English, Peyton meant “fighting man’s estate.” Take that or leave it, Peyton just has a nice ring to it.

For those who live by and love the sea, Morgan is a great name for a girl. It means sea defender.

Madison comes from son of Matthew. If you have a long line of Matthews in your family, this is a nice way to honor them.

Want to get a little playful with your daughter’s name? Take Greyson, which comes from Britain and means “son of the grey-haired man.”

As you might have guessed, Harper derives its meaning from one who plays the harp. If you aspire to raise a harpist, this name’s the ticket.

Welsh in origin, Davis is either used to refer to someone as the son of David or means beloved. For your baby girl, choose the latter.

For a winter Southern baby, Hollis makes a lovely seasonal name. It means dweller at the holly trees.

Huxley is an English name that may derive from wood clearing. If your family is the cabin-staying camping type, this might make a nice girl’s name.

How appropriate is this? Sutton means “from the Southern homestead.” Can’t think of a better Southern baby name than that.

Washington DC born Duke Ellington was a master jazz artist. If you have a musical family, pass on the Southerners spirited sound by naming your baby girl Ellington.

The name Cameron is Scottish and means crooked river. If you live near a flowing river and want to give your girl an appreciation for the landscape, namer her Cameron.

Emerson means brave or powerful, something every parent, Southern or otherwise, likely hopes their daughter will be.

Want to give your daughter great cocktail party banter for life? Name her Everly which comes from English meaning “wild boar in a woodland clearing.”

Ashby comes from Old Norse meaning by the farm. For Southern farm families, this is a nice girl’s name.

The South has always had a tight connection with England — they did found America after all. And if your Southern roots lean heavily Anglo then choose Kensington for your daughter which is a name that comes from a district of London.

Take away: call her anything you want. Just make sure it follows these guidelines to make it extra Southern.

This article was originally published on Aug. 25, 2021