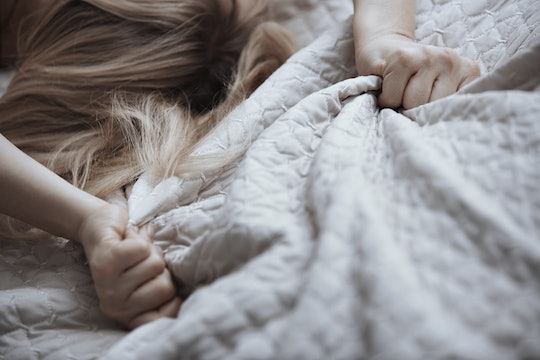 When Does Pregnancy Horniness Kick In?

A higher libido during pregnancy may be the greatest side effect of them all.

As far as pregnancy symptoms go, feeling more libidinous is obviously the best one by far. Many pregnant people say pregnancy makes them hot and bothered. But if you’re newly pregnant and are hugging the toilet bowl, you may be wondering when in pregnancy does that horniness start? Because it’s a pregnancy symptom that’s talked about, and for many, highly anticipated.

Why do we have an increased libido during pregnancy?

There’s even a psychological reason we crave and enjoy sex more when we’re pregnant. “Psychologically speaking, libido also increases because many women are experiencing the mental freedom of being able to have sex without the constant worry of becoming pregnant,” Abdur-Rahman says.

When does horniness start in pregnancy?

After the first few months is when most women begin to experience a high libido during pregnancy, says Gleaton. “The second trimester usually brings more energy, less nausea, and an increased desire to do most activities, including sex,” she says. And for many women that libido increases as pregnancy continues, according to Abdur-Rahman.

Many women fall into one of two camps when it comes to the hCg hormone — they want to get it on all the time, or they become intimately familiar with the toilet bowl. If you are in the former camp, and especially if you are feeling frisky during the last two trimesters of your pregnancy, you are probably trying to figure out the most comfortable pregnancy sex positions to accommodate your growing bump and to really take advantage of that extra blood flow down there.

What are the most comfortable sex positions for pregnancy?

As far as the most comfortable sex positions during pregnancy, that has to do with the position of your uterus. About 50% of women have a uterus position “in the midline,” which means it doesn’t point to the front or the back, Abdur-Rahman says. As for the other 50%, 25% of women have a uterus that points toward the back, and the other 25% have a uterus that points forward. In hetero sex, “The penis stimulating the growing uterus is responsible for the discomfort experienced during intercourse while pregnant,” he says. “During the first trimester, any discomfort is minimal because the uterus is still quite small. As the uterus grows during the second and third trimesters, penile stimulation during intercourse can cause progressively more discomfort.”

Whether your pregnancy horniness starts in the first trimester or the latter half of your pregnancy, enjoy it while you can. It may be weeks, or even a couple of months after your baby is born before you are able to comfortably have sex. So meanwhile, read up on that cowgirl position. You and your partner will be glad you did.

Dr. Idries Abdur-Rahman, M.D., OB-GYN, author of Everything You Ever Wanted to Know About Pregnancy (But Were Too Afraid or Embarrassed To Ask), and one half of TwinDoctorsTV.

More Like This
Barre Could Be The Low-Impact Prenatal Workout You Need
OB-GYNs On How The End Of Roe Changes How They Can Care For Us
Is Swimming Safe During Pregnancy? Here’s What To Know
This Is What Experts Say About Eating Hot Dogs During Pregnancy