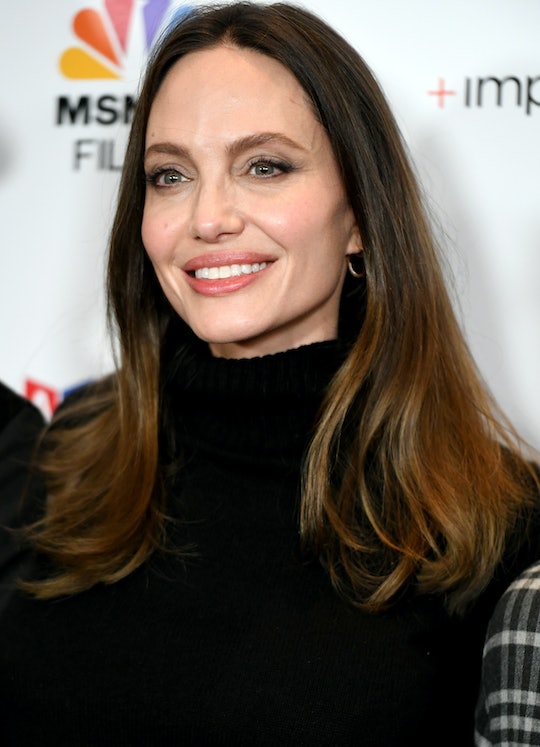 And the cast of the musical was psyched!

Angelina Jolie has been in busy Mom Mode these days celebrating her awesome daughters. She recently gave Zahara a dancing send-off to college and was surely proud of Shiloh for her impressive moves too. Now the mother of six is spending some quality time with youngest daughter Vivienne, 14, as they visited Philadelphia to catch a musical and hang backstage with the cast of Dear Evan Hansen.

The musical’s official account recently posted a picture of Jolie and Vivienne posing with several members of the wildly popular production, which is also playing on Broadway and was adapted into a movie. In the first photo, the twinning mother-daughter duo are seen with the star of the show, Anthony Norman, who plays the title role of Evan Hansen. Jolie wore a simple black long dress with matching sunglasses, while Vivienne was super casual in neutral sweatshirt and pants. In another shot, Vivienne is pictured with her mom and several of the other talented actors from the production. “👋👋👋 waving back at @angelinajolie and Vivienne this weekend in Philly,” the musical captioned the post.

The Eternals star, who also shares Knox, 14, Shiloh, 16, Pax, 18, Zahara, 17, and Maddox, 20, with her Brad Pitt, has recently been embroiled in some legal drama with her ex-husband, so it’s nice to see Jolie take a break with a show that puts a spotlight on teens’ mental health.

When she’s not focusing on her activism and supporting refugee issues, Jolie has continued to expand her film career in the coveted role of director. Salma Hayek who stars in the upcoming film, Without Blood, had nothing but gushing things to say about working under Jolie’s directorial eye. “Angelina is the best director I’ve ever worked with. I absolutely loved working with her; enjoyed every second of it. It’s a tough piece but it was so delicious to come to work every single day. She is a genius and I think this might be her best movie yet.” Hayek told Deadline in a recent interview.

While it’s unclear if Vivienne wants to follow in the footsteps of her famous thespian parents and take on the acting world, it’s clear that she enjoys being in the audience. The 14-year-old does have some pretty cool acting experience under her belt as she starred opposite her mom in the movie Maleficent in the role of Princess Aurora. Vivienne apparently got the part because she was the only one of the Jolie-Pitt kids who wasn’t scared of their mom in costume with facial prosthetics.

Whether Vivienne was in the theater picking up some acting tips or just taking in the musical as a regular civilian, it’s sweet to see Jolie and her mini-me enjoying some mother-daughter bonding together.