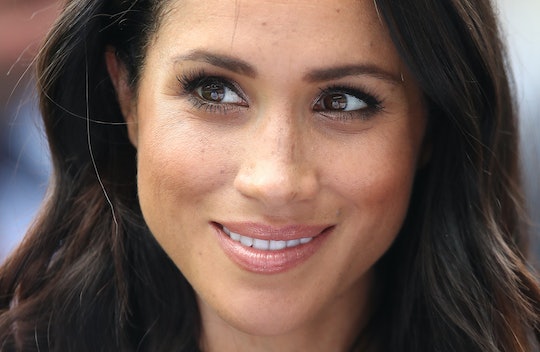 "These people won't stop until she miscarries."

As Oprah Winfrey's interview with the Duke and Duchess of Sussex draws near, things are getting tense. The past few days have seen accusations of bullying lobbed at the Duchess of Sussex by one-time members of the royal staff and a formal investigation into those claims opened by Buckingham Palace. It's a lot, especially for someone expecting a baby.

One celebrity in particular feels like it's all hitting "too close to home." Today Chrissy Teigen made an emotional plea for pregnant Meghan Markle on Twitter, and it was a sobering reminder that the beleaguered duchess is in a physically fragile state right now. "This meghan markle sh*t is hitting too close to home for me. these people won’t stop until she miscarries. f**king stop it."

In many ways, Teigen has a unique insight into what this stress could be doing to Markle right now. Both women tragically experienced pregnancy losses last year, and both shared their stories in essays in an effort to end the stigma of silence around those losses. And as a fellow woman who has been frequently criticized and even bullied, Teigen gets it.

It has been an intense month for the Duchess. After winning her privacy case against the Mail on Sunday, she and Prince Harry announced on Valentine's Day that they are expecting their second baby.

Then this week got ugly. On Wednesday Markle responded to claims published by The Sunday Times from a former Kensington Palace staffer accusing her of being a bully. Her statement said, "The Duchess is saddened by this latest attack on her character, particularly as someone who has been the target of bullying herself and is deeply committed to supporting those who have experienced pain and trauma. She is determined to continue her work building compassion around the world and will keep striving to set an example for doing what is right and doing what is good."

Despite Markle's denial of these claims, the British tabloids have not held back. And unfortunately, neither has Buckingham Palace; it issued a statement announcing an investigation into the claims. Social media has jumped into the fray as well, with Markle critics and supporters loudly taking sides.

Teigen is not the only celebrity speaking out in support of Markle. Several of the Duchess of Sussex' friends have come to her defense, including her former Suits co-star Patrick J. Adams, who unleashed a tirade on Twitter in defense of his friend on Friday. "It’s OBSCENE that the Royal Family, who’s newest member is currently GROWING INSIDE OF HER, is promoting and amplifying accusations of “bullying” against a woman who herself was basically forced to flea the UK in order protect her family and her own mental health."

The timing of this accusation was interesting. Markle and her husband Prince Harry stepped away from their senior royal roles last January and have largely stayed quiet since, but that is about to change. The couple are sitting down for an interview with Oprah Winfrey on Sunday, their first since their historic move with 22-month-old son Archie to California last year.

Whatever comes from their interview on Sunday, Markle and Prince Harry might be able to take some comfort in the support rallying around them. And perhaps let go of the rest.

Here's how to watch Meghan and Harry's interview with Oprah.