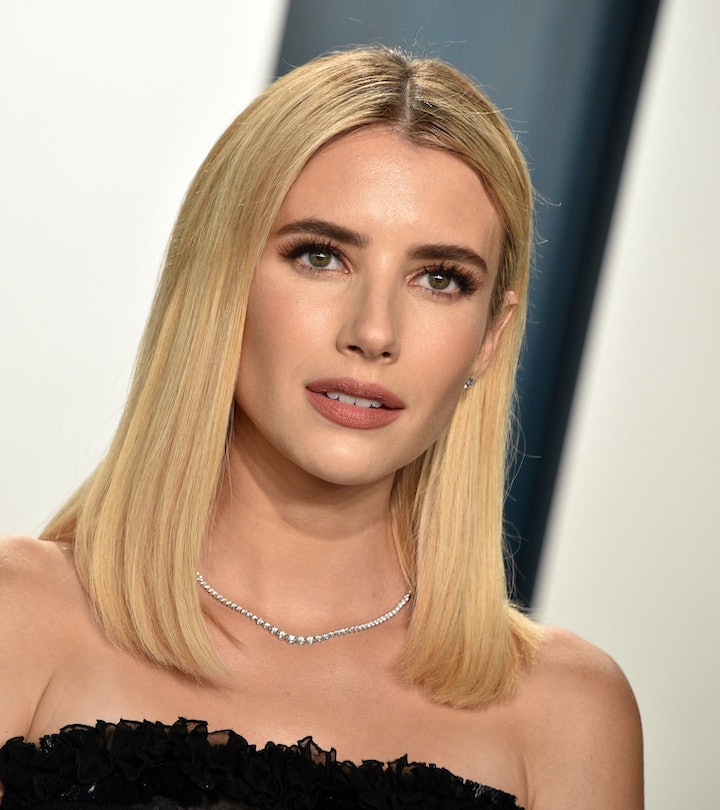 In a gorgeous photo featuring her dressed in tangerine and holding her sweet baby boy, Emma Roberts confirmed she gave birth and welcoming her first child with her boyfriend Garrett Hedlund. While reports circulated back in December, the actress officially shared the news for herself and revealed her little boy's name, Rhodes Robert Hedlund.

Roberts confirmed the news in the post made on Jan. 12, after TMZ initially reported that the Scream Queens star gave birth to a baby boy on Sunday, Dec. 27 in Los Angeles. At the time, the news outlet reported that Roberts and Hedlund named their son Rhodes, who reportedly weighed around 9 llbs. pounds at the time of his birth.

Roberts confirmed most of these details, posting a photo of her sitting in a yard wearing a bright orange dress, holding her son wrapped in a tangerine colored swaddle and cream colored hat. In the photo, Roberts is looking directly at her son, whose face is turned away from the camera.

“Thank you 2020 for getting one thing right,” Roberts captioned the photo, along with a sunshine emoji. “Our bright light Rhodes Robert Hedlund.”

The name Rhodes has a Greek origin and means “where roses grow,” according to NameBerry. His middle name, Robert, is likely an homage to Roberts’ own last name.

Roberts’ friends and followers took to the comments where they congratulated her on her adorable new addition. “I just liked it twice,” currently pregnant Ashley Tisdale commented. “Congrats beautiful.”

Roberts initially shared the news of her pregnancy as well as revealing the sex of her baby with a one-two punch post on Instagram back in June, where she posed with Friday Night Lights star Hedlund and shared the caption, "Me... and my two favorite guys." Since then, Roberts shared loads of beautiful bump pics with her social media followers, most recently alongside a sweet collection of baby clothes in soft, neutral material that included a little stuffed bunny and a tiny hat.

One thing we know for sure, Rhodes will have plenty of playmates to choose from out of his mom's cast mates. Back in September Billie Lourd, the daughter of actress Carrie Fisher who co-starred with Roberts in Scream Queens, welcomed baby boy Kingston Fisher Lourd Rydell with fiancé Austen Rydell. Just one month before in August, Lea Michele also welcomed a baby boy named Ever Leo. Which means the Scream Queens have a few little scream princes on their hands, I guess.

Perhaps Roberts will share photos of baby Rhodes wearing that hat or posing with that little bunny now that he has officially made his debut.

This article was originally published on Dec. 29, 2020