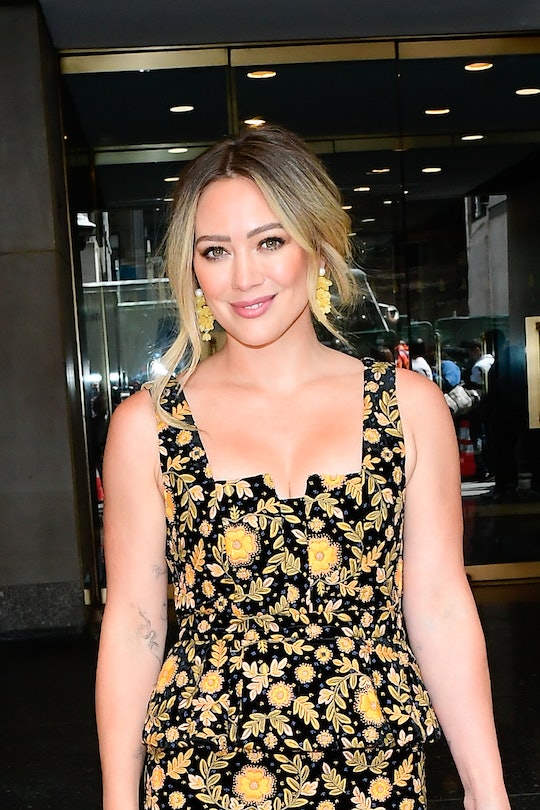 And has the scissor injury to prove it!

Hilary Duff is an accomplished actress, singer, novelist, kid’s fashion designer, and former teen idol. But the mom of two can now add one more impressive title to her resume: children’s hair stylist. The How I Met Your Father star recently hopped onto social media to share pictures of her latest foray into amateur hairdressing when she posted several photos of her adorable daughter Mae sporting some freshly cut bangs. Not only did Duff chop her kid’s locks by herself, she’s even got the scissor injury to prove it.

It’s quite obvious that Duff is super proud of her cosmetology work because she posted not one, not two, but nine photos of her toddler’s new bangs on Instagram. Mae looked sweet as can be on the couch dressed in a floral top (while she probably took in a little CoComelon). The 1-year-old rocked her new bangs along with two side buns, and Duff showed every possible angle of her toddler’s hairdo with many many photos. But the last picture the Younger alum posted showed just how dangerous hands-on mothering (and styling) can be, as Duff shared a shot of her nude manicured hand with a conspicuous cut on her knuckle.

Duff received a whole lot of love in the comments section for her handiwork, but maybe the most important reply came from a professional — celebrity hairstylist Riawna Capri, who cuts the tresses of celebs like Amy Schumer, Nina Dobrev, Kristin Cavallari, and Selena Gomez. “Cutes! You crushed! ❤️👏❤️❤️👏❤️ and you should see my scars there 😂,” Capri wrote in the comments.

When Duff is not busy with her new hobby or starring in her latest sitcom, she’s in major Mom Mode with her three kids (along with the occasional moms getaway). She shares Mae and 3-year-old Banks with husband Matthew Koma, and also has 10-year-old son Luca, who she shares with ex-husband Mike Comrie.

Back in the day when Duff played iconic tween Lizzie McGuire on the beloved kid’s show, she was also known for sporting signature blonde fringe. In fact, there’s even an Instagram account dedicated to and named after Hilary Duff’s Bangs.

So maybe Duff was feeling a little nostalgic for the old days when she gave Mae a new look? Or maybe Mae in all her feisty toddler glory demanded this new hairstyle herself? Assuming she has now expanded her vocabulary beyond her favorite word: no.