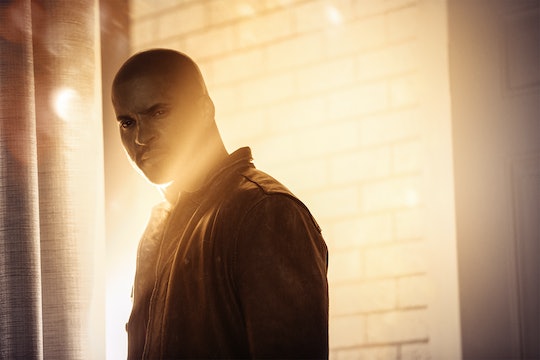 Shadow Moon Is Full Of Mystery On American Gods

American Gods is based on a novel of the same name.

Season 1 of Starz's American Gods is best described as "enigmatic." It’s the kind of atmospheric show that won't slow down enough to explain precisely what's going on. Oftentimes, viewers have to figure things out as they go along. That tends to be the case with many of the episodes' cold opens, featuring various Old Gods making their inaugural trips to America. But perhaps one of the most mysterious figures on the show is its leading man, Shadow Moon. In Season 1, viewers know very little about him and whether or not Shadow Moon is a god on American Gods.

Who Is Shadow Moon?

By the first few episodes in Season 1, viewers are aware that Shadow Moon, played by Ricky Whittle, is just a guy with an awesome name who is recently out of jail, has a propensity for coin tricks, and lost his wife (and then got her back again, sorta). As of Season 1, there is no explicit confirmation that Shadow is anything other than an ordinary human man — but then again, this show doesn't really deal in explicit confirmations. At the very least, one thing is for sure: Shadow doesn't appear to think that he himself is anything other than a mortal man. He's been consistently horrified and baffled by nearly everything he's experienced in the world of the deities since he began working with Mr. Wednesday.

Shadow Moon Could Be A God

Then again, there are several vague hints that make a secret deific identity for Shadow a distinct possibility.

The first, and most prominent, is Laura Moon's resurrection in Season 1. As far as viewers know, it's the coin that Mad Sweeney erroneously gave to Shadow that allowed for her return to the land of the living. But that doesn't quite explain the strange glow around Shadow that continuously leads Laura to seek out her husband. Since she rose from the dead, the light around him has been a sort of homing beacon for her to find her husband. Is that just because he was the one to "give" her the coin? Or can Laura see something about Shadow's true nature, now, in death, that she couldn't see before and that he can't see now?

Then, there's the small matter of Shadow making it snow ahead of the bank robbery in Chicago.

Throughout "Head Full of Snow," Wednesday repeatedly told Shadow to concentrate on snow, treating viewers to a barrage of gorgeous snow-related imagery inside Shadow's head. Lo and behold, it eventually did begin snowing, and Wednesday cryptically seemed to suggest that Shadow actually did make it happen. Speaking of "things in Shadow's head," there is also the matter of his strange, possibly prophetic dreams of the White Buffalo. It certainly seems like Shadow may at the very least have powers beyond his own comprehension.

Shadow Moon Is A Character In The American Gods Book

Of course, American Gods is based on a novel of the same name — so is there an answer to Shadow's identity within the original story? Turns out there is. Warning: Book spoilers from American Gods ahead!

In the book, it's eventually revealed that Shadow is a demigod — the son of a god and a human woman, according to ScreenRant. Specifically, he's the son of Odin — aka, Mr. Wednesday — and it's for that reason he was "recruited" by Wednesday to serve a very specific purpose in the brewing war between the Old and New Gods.

Starz, unfortunately, has canceled American Gods, but there are discussions that they could wrap up the show with a TV movie, according to Deadline. Cross your fingers that Shadow Moon’s fate gets the ending that he deserves.

This article was originally published on June 4, 2017