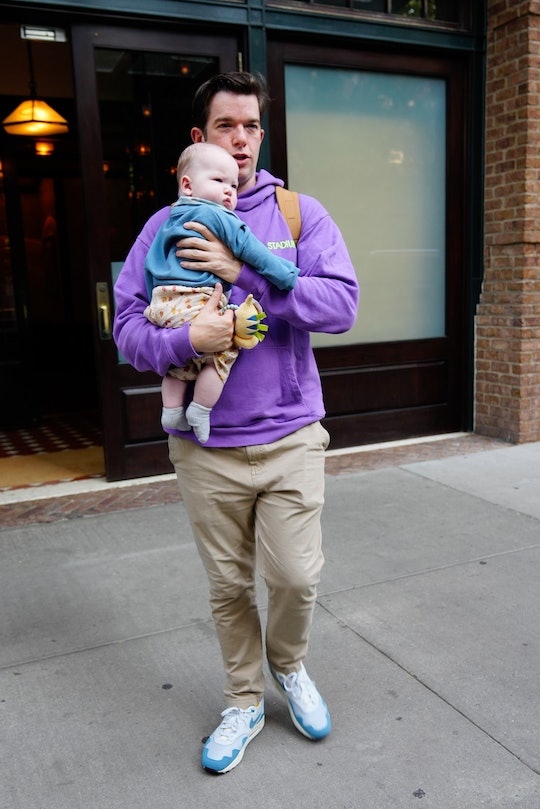 Comedian and dad John Mulaney just hit the big 4-0 and celebrated the big day in an adorable way. The new father to 9-month-old Malcom, who he shares with girlfriend Olivia Munn, hopped onto social media to share a truly special father-son bonding moment while traveling the country for his From Scratch stand-up tour.

The couple first announced they were expecting their little boy just days apart from each other. While Munn spilled the beans to TV host and Saved by the Bell alum Mario Lopez on Access, Mulaney went the late-night route and shared his reveal on Late Night With Seth Meyers.

In a recent Instagram post, the comedian shared a picture onstage at one of his recent performance venues in Nashville, Tennessee. Munlaney was center stage with his little boy on his lap in front of a lit empty theater. The star of Chip 'n Dale: Rescue Rangers held Malcolm in front of a huge pile of white balloons and gold confetti sure to mesmerize any baby. “There is truly no better way to turn 40,” Mulaney captioned the post.

The stand-up comic also shared an Instagram Story with all of the members of his loved-up crew. In another shot onstage under the spotlights, Mulaney kissed Munn’s forehead and held sugar-loving Malcolm, who definitely enjoyed his dad’s birthday cake. “Turning 40 with my little family and a fist of frosting,” Mulaney wrote over the picture.

In his short but exciting life, baby Malcolm has truly made the rounds to some pretty impressive spots! Mulaney took his son on tour as a little roadie, to the world-famous Saturday Night Live studio, and even to Madison Square Garden. And Mulaney basically wears the adorably-portable baby everywhere.

We already know that his son is a seasoned traveler as Munn has already shared an incredibly relatable Instagram video, where she strolled a jet-lagged Malcolm in the driveway, sporting glasses, a open flannel shirt (classic breastfeeding uniform), and bare feet. The actress also relied on God’s Gift to all sleepless mothers everywhere: The Shusher!

The proud dad followed up his birthday pictures with his latest Instagram Reel of a recent night off of a somewhat inexplicable video featuring a bunch of his pals in cowboy hats and Western shirts walking around to Cyndi Lauper’s “Girls Just Want To Have Fun.”

While it’s unclear if Mulaney is just up to his standard comedic shenanigans, having a cowboy midlife crisis, or just getting into the Nashville spirit — Dad Life definitely looks good on him.

More Like This
John Mulaney Teaches His Son To Say "Ahh" After Drinking Water In A Super Cute Video
Nick Cannon Announced The Birth Of His 9th Child, A Daughter Named Onyx
Kanye West Apologizes To Kim Kardashian For The Stress He Caused The Mother Of His Children
Ryan Reynolds Joked About Wanting To Duct Tape An iPad To His Kids' Faces