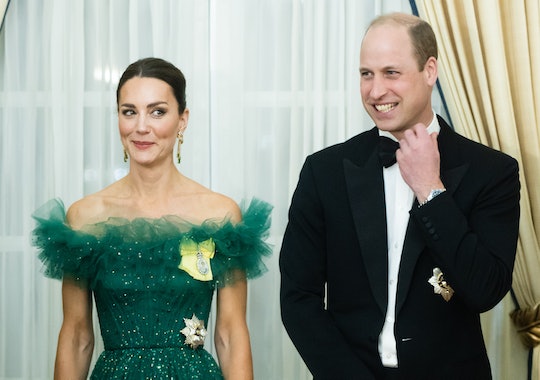 Well, who wouldn’t be?

Those poor Cambridge kids. Their parents are off having the time of their lives on a royal tour of Belize, Jamaica, and the Bahamas, and where are they? Back in the United Kingdom, going to school and stuck to just hang around the palace all day. Poor darlings. It probably wouldn’t help matters that their parents got to do a few things that mom Kate Middleton said would make them “jealous.” Talk about rubbing it in. Hopefully they’ll get some good souvenirs to make up for it.

The Duke and Duchess of Cambridge initially visited Hopkins, Belize on the first leg of their tour, and they really started things off with a bang. They kicked things off by dancing the punta with their hosts, something 8-year-old Prince George and 6-year-old Princess Charlotte would certainly have enjoyed since they are both big fans of impromptu dancing. Then the couple moved on to what would surely have been the real selling feature for this trip for their kids — a chocolate production site. Prince William and Kate Middleton took turns tasting cacao nibs and having a grand old time.

So much so that Prince William said, per People, “Do you take apprentices? Can I come and work for you? It’s my kind of thing.” Middleton, eating a chocolate dipped tortilla chip, added, “I think our children will be very jealous.”

Kate Middleton says her kids would be jealous of her trip.

I mean... yes, obviously they would be jealous of chocolate tasting. And let’s not even get into the fact that they swam with sharks. This whole trip is the stuff of dreams for kids.

The couple’s three children do have a few consolation prizes to comfort them. Before every official royal trip they get a little geography lesson from their parents where they show them on the map where they will be visiting. Without them. And they did get to enjoy a trip or two with their parents this past summer, spending time in Jordan and also going sailing off the coast of Scotland.

Of course, that was then and this is now and kids don’t really care about a trip that happened months ago. It seems certain they would like to be off tasting chocolate, dancing, and swimming with sharks alongside their parents. All I can say is, I hope they’re eating pizza on the sofa in Middleton’s absence. She’ll love that.