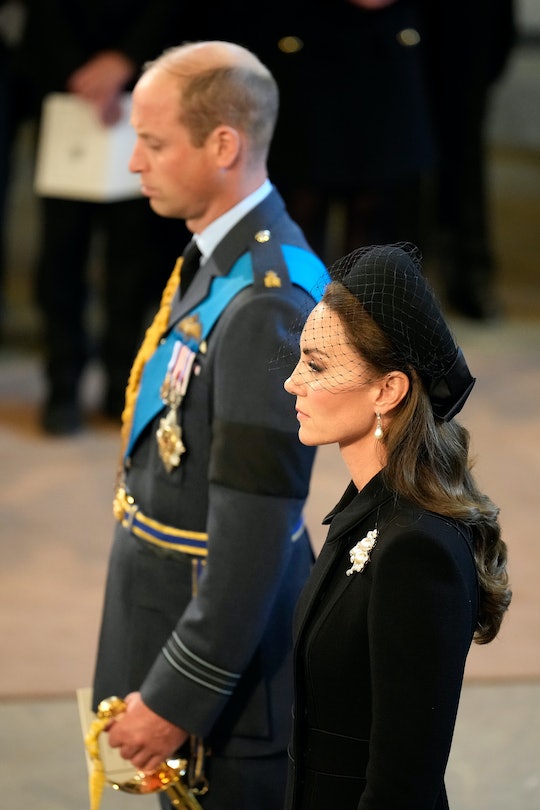 She honored two important women in her life with pearls and diamonds.

When the royal family all gathered at Westminster Hall to pay tribute to Queen Elizabeth on Wednesday, all of her female family members had one thing in common. They were all wearing pearls in some fashion or another. Queen Consort Camilla wore a pearl necklace, Meghan Markle wore pearl earrings once gifted to her by the late sovereign. And Kate Middleton, Princess of Wales, wore a beautiful pearl brooch. A brooch that once belonged to Queen Elizabeth herself.

The Queen Consort wore a triple strand of pearls around her neck, while Middleton wore Her Majesty’s Diamond and Pearl Leaf Brooch, featuring three large pearls at the center of a diamond leaf, according to Hello!. Royal women have worn pearls to funerals since the time of Queen Victoria, who dressed in black accessorized with pearls for 40 years after the death of her husband Prince Albert. Pearls have come to be seen as “mourning jewelry,” so it’s fitting that Middleton would wear the pearl brooch. The Princess of Wales also wore a pearl necklace when attending Prince Philip’s funeral in 2021 that she had previously worn to celebrate his 70th wedding anniversary with Queen Elizabeth.

As a future Queen Consort herself whose life has changed with the death of Queen Elizabeth, Middleton must be thinking about the royal women who have come before her. Princess Diana, a loving mother to her husband and a humanitarian. And Queen Elizabeth, a woman who diligently spent her entire life in service to the Crown. Two tough acts to follow, indeed.