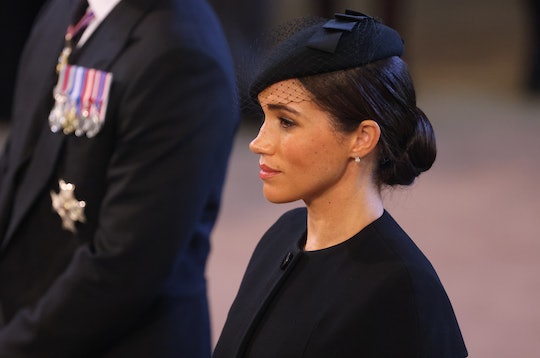 A reminder of a day spent with Her Majesty.

Meghan Markle, the Duchess of Sussex, joined the rest of the royal family in honoring Queen Elizabeth at her funeral procession on Wednesday. She stood behind Queen Elizabeth’s coffin alongside Sophie, the Countess of Wessex and her sister-in-law Kate Middleton, Princess of Wales, at Westminster Hall, looking sad to say goodbye to the monarch. But she also looked sad to be saying goodbye to her grandmother-in-law, and found a way to pay her own personal tribute to her husband’s beloved granny. By wearing a pair of earrings Queen Elizabeth gifted her when she first married into the royal family four years ago.

Queen Elizabeth and Meghan Markle enjoyed a solo royal engagement together back in 2018 in the early days of her marriage to Prince Harry. The two women had a bit of an adventure together, traveling by overnight train from London to Cheshire to open the Mersey Gateway Bridge in Widnes and the Storyhouse cultural centre and then settling in for a lunch together at the Chester Town Hall.

To mark the occasion, where the two were photographed giggling together and clearly enjoying each other’s company, Markle was gifted a pair of pearl earrings by Queen Elizabeth, according to The Mirror.

The Duchess of Sussex wore those same earrings on Wednesday to say goodbye to Queen Elizabeth, a woman both she and her husband admired so much they named their 1-year-old daughter Lilibet to honor the cherished nickname she had been given as a child by her own father. Fortunately the 96-year-old monarch was able to meet her namesake when the family traveled to London from California to celebrate her Platinum Jubilee. A moment that was so meaningful to Prince Harry he shared it in his tribute to his grandmother, remembering fondly the first moment she “hugged [her] beloved great-grandchildren.”

All of the royal women wore pearls at Queen Elizabeth’s funeral, a tradition that started back in the time of Queen Victoria as pearls are considered “mourning jewelry,” per Hello!

While the pearls signify mourning, hopefully Meghan Markle will take with her the memory of that day she and Queen Elizabeth shared. Laughing together in the sunshine. Just two women who enjoyed each other’s company.