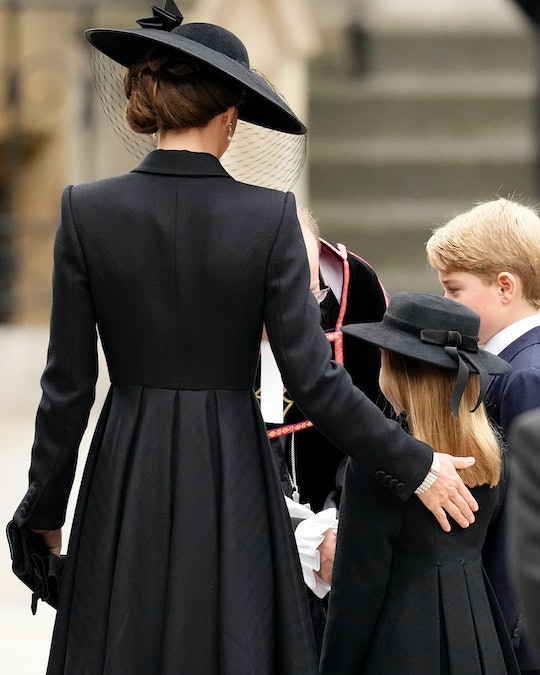 The 7-year-old was as poised as her mother to pay her respects to her great-grandmother.

Kate Middleton and Princess Charlotte wore matching coat dresses to Queen Elizabeth II’s funeral today at Westminster Abbey. The 7-year-old was her mom’s mini-me in a black coat, which she wore with black stockings, black Mary Jane flats, and a black hat with a bow on the back worn over her long hair. Princess Kate paired her coat dress with black tights, black heels, and a black hat and veil, with her hair elegantly pinned up.

Princess Charlotte also wore a special horseshoe brooch to honor her great-grandmother, while the Princess of Wales wore pearls belonging to her grandmother-in-law. She wore the Bahrain Pearl Drop Earrings that were a gift to the Queen on her wedding in 1947, according to People. The mother of three also wore the Queen’s Four Row Japanese Pearl Choker, with a center diamond clasp, from the Queen’s personal collection. She wore this same jewelry at Prince Philip’s funeral in April 2021, making her decision to wear them today a gesture toward Queen Elizabeth’s and Prince Philip’s great love.

Meghan Markle was also in attendance, dressed similarly in a black dress and black hat, as well as earrings gifted to her from the Queen in 2018. Queen Consort Camilla wore all black as well, paired with a diamond brooch from Queen Victoria and a Launer clutch in tribute to the Queen, who was rarely seen without one.

Coat dresses are an iconic part of Princess Kate’s wardrobe. She has worn many formal coats and coat dresses throughout the years in a wide variety of colors, which you can see on the Kate Middleton Style Blog. It seems Princess Charlotte is taking after her mother with the elegant look, as she has worn beautiful coats on occasion too, like the stunning green one for Christmas 2019, which matched her mom’s clutch.

Princess Charlotte often wears dresses, but the choice to wear a formal black coat dress today made her look more grown up and sophisticated while she paid her respects to Queen Elizabeth with her family on this solemn day. She was as poised and beautiful as her mama.