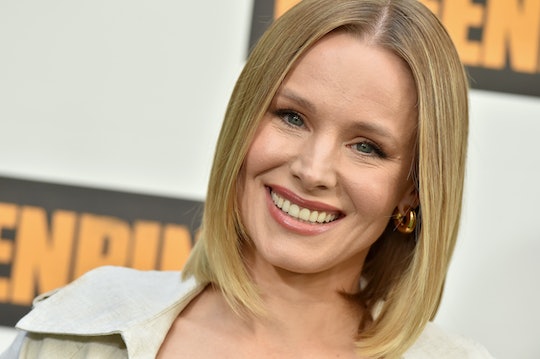 “I come home and they will just, they’ll pull the rug out from under you so quickly.”

If ever Kristen Bell, star of stage and screen and beloved celebrity in general, starts to feel like she’s getting a bit too big for her britches, all she need do is go home to spend time with her daughters. Because they will cut her down to size (metaphorically-speaking) in two seconds flat. Bell is crediting the two daughters she shares with husband Dax Shepard, 9-year-old Lincoln and 7-year-old Delta, with keeping things real on the home front. Simply with the power of their insults.

The Frozen star spoke to E! recently about how her kids bring her back down to earth if she’s been out at work feeling “elegant and fancy” all day. “The amount of insults that they can hurl at me in a very short period of time,” she told the outlet, “it really brings me back down to earth.” Bell added that the insults start coming fast and furious as soon as she gets home. “I come home and they will just, they’ll pull the rug out from under you so quickly.”

So much so, in fact, that Bell said any movie about her life should be called “My Kids Keep Me Grounded.”

These two girls have a history of pranking their mom as well as insulting her, but fortunately Bell has always taken it in stride. Even when they took some wild guesses at her age on her birthday, with one assuming she was 63 and the other saying 89, Bell seemed mostly unbothered by their honest response. No matter how insulting.

Bell’s daughters Lincoln and Delta have long had reputations as being brutally honest when they feel they need to be. Like back in 2021 when Delta was leaving threatening notes around the house about going on a “30 minute hunger strike” with a note attached to her door reading, “Don't disturb, Delta is starving to death, only Mom can come in.” Or trying to deal with homeschooling and her daughter immediately started her own personal rebellion. “When we started the quarantine,” Bell told Ashley Graham at the time, “the first math sheet I gave my daughter, in all the answer lines she wrote, 'no, no, no, no, no.’”

Here’s the thing; Bell’s household does not sound even a little boring. Raising daughters who are honest, even when it might accidentally sting a little, is a good thing. And pretty funny, so why not just go with it?