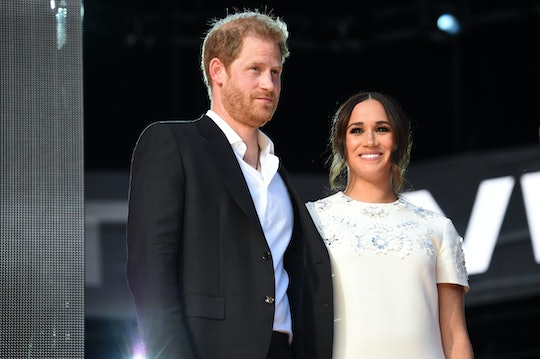 The Meaning Behind Each Of Lilibet Diana's Royally Inspired Names

It’s all about the women in the family.

When Prince Harry and Meghan Markle welcomed their first daughter in June 2021, they clearly put a lot of thought into her name. Like, a lot of thought. If you actually break down the name Lilibet “Lili” Diana, it appears as though there are several sources of inspiration behind their choice.

Prince Harry and Meghan Markle shared the happy news that they had welcomed their second baby, a little sister for 2-year-old big brother Archie, back in June with a statement through their spokesperson reading, “It is with great joy that Prince Harry and Meghan, The Duke and Duchess of Sussex, welcome their daughter Lilibet 'Lili' Diana Mountbatten-Windsor, to the world. Lili was born on Friday, June 4 at 11:40 a.m. in the trusted care of the doctors and staff at Santa Barbara Cottage Hospital in Santa Barbara, CA. She weighed 7 lbs 11 oz. Both mother and child are healthy and well, and settling in at home.”

The name immediately got a big reaction on both sides of the pond, particularly since the couple stepped away from their senior royal roles in March 2020 and have not really been back to visit the royal family with their children.

After all, Lilibet is named after her great-grandmother.

Queen Elizabeth’s nickname from childhood on has been Lilibet, so called by her father King George VI ever since she struggled to pronounce her own name as a little girl. Her husband Prince Philip also called her Lilibet from time to time, per The Independent, and the name is considered a real term of endearment for the monarch. A reminder, perhaps, of Prince Harry’s genuine affection for his grandmother. The couple explained in their statement that “Lili is named after her great-grandmother, Her Majesty The Queen, whose family nickname is Lilibet.”

As for her middle name, it was all about Prince Harry’s late mother, Princess Diana, which “was chosen to honor her beloved late grandmother, The Princess of Wales.”

Lilibet’s own nickname of “Lili” could well have been inspired by Markle’s own nickname from her mother Doria Ragland, who called her “Flower” when she was growing up. Lili is, after all, a type of flower. And so perhaps women on both sides of the family were honored by her name.

Prince Harry is reportedly trying to bring his children to meet his grandmother Queen Elizabeth in the near future. But until he does, hopefully she can take comfort in the fact that her great-granddaughter has been given her very own cherished nickname. How sweet.

More Like This
Viral TikTok Video Confirms Princess Charlotte Is Princess Diana's True Heir
10 Ways Prince George & Prince Louis Are So Different From Each Other
Meghan Markle Calls On Men "To Be Vocal" In The Aftermath Of Roe v. Wade Ending
Princess Charlotte Got So Excited To Shake A Royal Fan's Hand