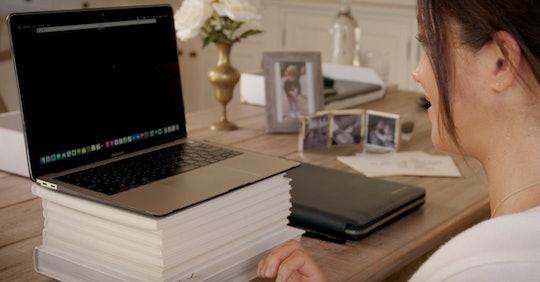 The proud mom has a few family photos displayed on her desk.

In a total “blink-and-you’ll-miss-it” moment in a video posted to Archewell in honor of her 40th birthday, Meghan Markle gave us a peek at the photos on her desk, which include a never-before-seen photo of her son Archie. But did the Duchess of Sussex also kinda, sorta share a glimpse of her newborn daughter, Lilibet “Lili” Diana?

Meghan celebrated her milestone birthday by launching the 40x40 initiative, which involves asking women to dedicate 40 minutes of their time to help mentor and support women going back to work. Meghan announced this in the cheeky video, where she chatted with the hilarious actress, Melissa McCarthy from her home office.

Meghan’s office, as expected, is absolutely stunning. She has a beautiful wooden desk with stack of her children’s book, The Bench, sitting on top of it, along with a vase of white roses and what appears to be photos of her two children.

In the first few seconds of the video, the camera pans to Meghan’s desk, which has a photo of what appears to be Meghan and Prince Harry’s 2-year-old son, Archie. This picture, adorned in a gray frame, shows the little boy with a full head of hair, much like the photo that was released in honor of his second birthday.

In another set of frames, some suspect that the couple’s 2-month-old daughter, Lili, is in the trio of photos. But, as you can see below, the shot is very blurry, so it’s hard to know for sure. People has reported that “Lili can be seen in the center of a tri-fold picture frame.”

The couple has not yet shared any photos of their daughter since they announced that Meghan gave birth on June 4. But when they’ve shared photos of their son Archie, they’ve been in honor of a big occasion like his birthday or Mother’s Day.

While it’s not clear what specific photos are on Meghan’s desk, it seems she has office decor in common with Harry’s grandmother, Queen Elizabeth, who’s known for putting new photos of her great-grandchildren on her desk.

The glimpse of her office photos wasn’t the only Easter egg in Meghan’s birthday video; Harry also briefly appears, juggling in his wife’s office window. Who knew the Duke of Sussex also moonlights as a juggler?