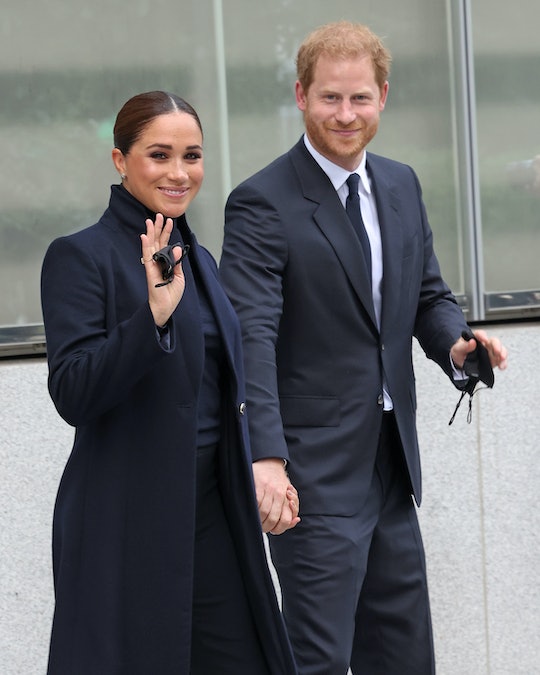 In their first public appearance since welcoming their daughter, Lilibet Diana, in June, Meghan Markle and Prince Harry visited New York City and looked as happy as can be.

The couple stepped out in Manhattan on Sept. 23, where they kicked off their trip to the Big Apple to visit One World Observatory with Mayor Bill DeBlasio and Gov. Kathy Hochel. Meghan fit right in to the chic New York crowd with her sleek black coat, turtleneck, and black slacks, while Harry opted for a traditional suit.

This Is Their First Public Appearance In A While

Although seeing Harry and Meghan out and about used to be quite common when they were senior members of the royal family, their public appearances have become less frequent since moving to California in early 2020. After Meghan gave birth to their daughter, Lilibet, in June, the couple took time to enjoy their life as new parents and adjust to having a new baby in their home alongside their 2-year-old son, Archie. But now, three months later, the Duke and Duchess of Sussex are back and better than ever. Seriously, Meghan is giving all of the fall vibes.

The last time Meghan was in NYC was in September 2019, according to Elle, where she cheered on her BFF, Serena Williams, at the U.S. Open tennis tournament. But this is the first time that the couple has been in New York together, publicly, according to Page Six. And it definitely seems like they’re embracing it.

They’re In New York For Business

But Harry and Meghan aren’t just in New York to embrace the romance of fall and pretend like they’re in a Nora Ephron film, although that is a perk. They’re actually visiting New York City for other matters. The couple will make an appearance at Global Citizen Live held on Central Park’s Great Lawn on Saturday, Sept. 25, where they will give their vocal support for global vaccine equity. Unfortunately, the couple’s two kids aren’t with them on this trip to New York, according to Page Six.

The couple has previously worked with Global Citizen for the Vax Live concert in California April, where they joined a number of celebrities to call on government officials for COVID-19 vaccine access to all. “We can’t leave anybody behind,” the couple said in a statement at the time. “We will all benefit, we will all be safer, when everyone, everywhere, had equal access to the vaccine.”

Hopefully, Harry and Meghan can sneak in some time to check out the sights and stroll in Central Park when they’re not meeting with public officials and calling for equal vaccine access.