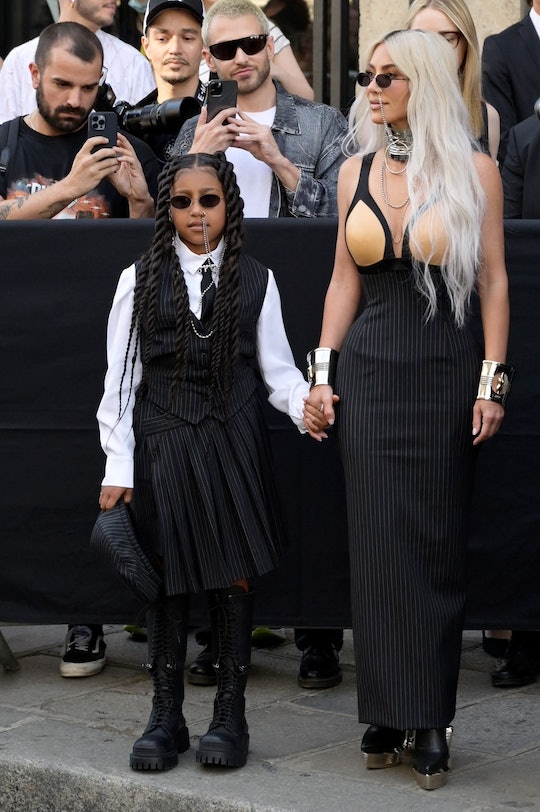 Yellow is the new black!

Kim Kardashian not only runs her own successful beauty brand, she probably has the personal numbers of every top make-up artist ready in her cell phone VIP list. With all that access to any glam at the tip of her manicured fingertips, there’s still one person she can count on to create extra special looks — her daughter North West. In a recent video posted to their joint mommy-daughter TikTok account, North West showed off her impressive artistry and transformed one of the most recognizable faces in the world into a bright yellow “Mommy Minion.”

North West jumped on the social media bandwagon and participated in the viral trend to transform people into those lovable mumbling Minions. In a recent TikTok posted to their “Kim and North” shared account, the fun video was set to a pretty hilarious soundtrack of Minions singing the ‘90s boy band love song “I Swear.” North West was hooked up with with several palettes of professional make-up and ready to show off her skills. The young girl expertly applied foundation to her famous mama’s face and carefully applied black eyeliner around her eyes. North continued with the signature Minion-yellow face and and sparkly blue lips. Kardashian sported a platinum bob and was decked out in what appears to be some kind of denim robe situation.

In a dangerous move only to be attempted by highly trained moms who know how to handle their make-up without staining their pristine furniture, Kardashian posed on a very-white couch with her signature smooch and peace sign. “💛 MOMMY MINION 💛 ,” Kim and North captioned the post in their joint-account that states in the bio is “managed by an adult.”

This isn’t the first time North West has proved herself to be quite the artist. Kardashian showed off the artwork that North West whipped up while she was recovering from Covid (a very creative way to pass the time). The SKIMS founder also recently posted some sketches that North did for Yeezy (that kind of freaked some people out as she may have made the very avant-garde decision to use human hair):

Although there has been some drama in the past with North’s famous father, Kanye West, disapproving of his daughter’s TikTok access, things seemed to have settled down on that parental front. Although Kardashian and West are no longer together, they prioritize co-parenting their four children: North, 6-year-old Saint, 4-year-old Chicago, and 3-year-old Psalm.

When she’s not busy with her art, North has also stepped it up as self-anointed Vogue photo-shoot stylist, on a mission to banish all things boring. With such famous parents who have each made their indelible marks in the worlds of fashion and pop culture, it’s not surprising that North West has definitely inherited some very creative genes!

We can’t wait to see what amazing and trend-setting ideas the 9-year-old will come up with next!