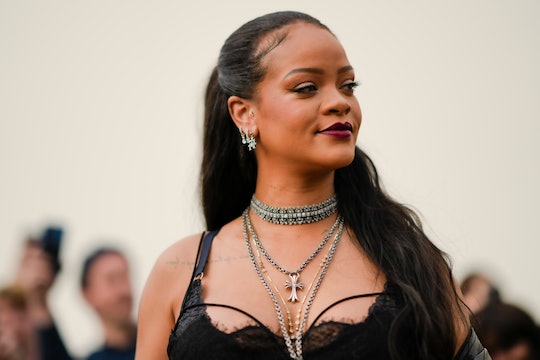 “Don’t put me on no wicker chair somewhere with gifts at my feet where everyone is staring at me.”

If you happen to be planning a baby shower for Rihanna any time in the near future, here’s a little advice for you: Skip all the stereotypical baby shower tropes and go straight to the liquor cabinet. Because Rihanna wants everyone to be “plastered” at her baby shower, and she’s simply not having any other pastel-colored nonsense.

Now that Rihanna has revealed that she is in her third trimester of pregnancy with her first child with A$AP Rocky, she is speaking out about her identity as a mom. As with everything else in her life, the “Diamonds” singer knows exactly what she wants and isn’t afraid to ask for it. Like with baby showers, for instance. In a new interview with Vogue, Rihanna was crystal clear about her vision for a baby shower. What she doesn’t want? “No brunch, no blush tones. And no animal-shaped nothing,” she told the magazine.

Sure, she gets that this type of baby shower is “lit for a lot of people — I’ve even planned a couple of baby showers like that myself — it’s just not right for me.”

Instead, Rihanna has a much more individualistic take on what she would like for a baby shower. “Personally, I want a party. I want everyone to be plastered and crawling out,” Rihanna told Vogue. “And it’s got to be co-ed! Don’t put me on no wicker chair somewhere with gifts at my feet where everyone is staring at me.”

You heard her. Don’t try it.

Mark my words; after Rihanna has a co-ed baby shower where people get “plastered,” it’s going to become a thing.

Rihanna has been giving a lot of thought to her parenting identity, both during her baby shower and after. She recently admitted in a birthday post to her mom that “being on the verge of motherhood, unlocked new levels of love and respect I have for my mommy in a way that I could never explain!” And she’s already thinking about the kind of mom she hopes to be when her little one arrives. Real Housewives Of New Jersey’s Teresa Guidice, who she sees as a powerful mom. “Teresa from Jersey does not play about her kids. She will flatten you about those kids. And that resonates with me a lot because I feel like that's the type of mom I'm going to be,” Rihanna told Elle. “Psycho about it.”

One type of mom she’s not? A gender reveal type mom. Rihanna was not interested at all when a reporter recently asked her if her baby was a boy or a girl, and she explained to Vogue that she will not be having a gender reveal party. “I asked my doctor: Is something wrong with me for not wanting this? Because people keep asking me. Am I a bad mom? When we’re ready to tell the world, we’ll just tell them.”

Rihanna hasn’t even given birth yet and already she knows the secret; becoming a parent doesn’t have to mean giving up your own sense of identity. Especially if you’re Rihanna.