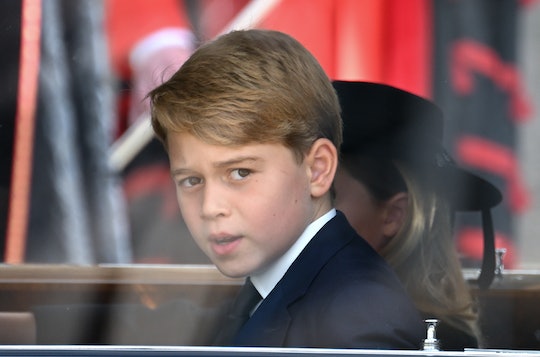 Prince George Reportedly Got Sassy In A Fight With A Classmate

“My dad will be king so you better watch out.”

It has been a long and complicated month for the royal kids. Not only did 9-year-old Prince George, 7-year-old Princess Charlotte, and 4-year-old Prince Louis move homes, they started at a new school. Then they lost their great-grandmother Queen Elizabeth, which meant public mourning and many changes for them, including their names from Cambridge to Wales as their parents became the Prince and Princess of Wales. The stress may be getting to Prince George, who reportedly got into a playground tussle with another kid at school and resorted to the age-old response used by kids everywhere since forever.

According to royal insider Katie Nicholl, Prince George got into a bit of a spat with one of his classmates at his Lambrook School, close to his new home of Adelaide Cottage in Windsor. Nicholl noted in an excerpt from her new book, The New Royal, that Prince George used a secret weapon when fighting with his friend — his own version of “do you know who my father is?”

“[Prince William and Kate Middleton] are raising their children, particularly Prince George, with an awareness of who he is and the role he will inherit, but they are keen not to weigh them down with a sense of duty,” Nicholl wrote, per The Daily Beast. “George understands he will one day be king and as a little boy sparred with friends at school, outdoing his peers with a [devastating] line: ‘My dad will be king so you better watch out.’”

While there will most certainly be some critics who see Prince George’s comments as bratty or otherwise concerning, I beg those same critics to head to any schoolyard. That whole “my dad is tougher than your dad,” or “my mom is tougher than your mom” response to conflict is probably as old as time. In fact, I think Prince George showed remarkable restraint as he didn’t say, “you better watch out, I’ll be King someday.” He does know that he’s next in line after his dad Prince William, after all, and that threat would be a tempting one, don’t you think? (Seriously, I would mention it to my friends and enemies daily if I was going to one day be their monarch.)

Prince George’s behavior is pretty typical and I think understandable given he just attended his granny’s funeral alongside his parents — which happened to be a state funeral watched by billions of people where he was lectured by his sister Princess Charlotte about royal protocol in front of the entire world.

No wonder he felt like reminding everyone where he stood.