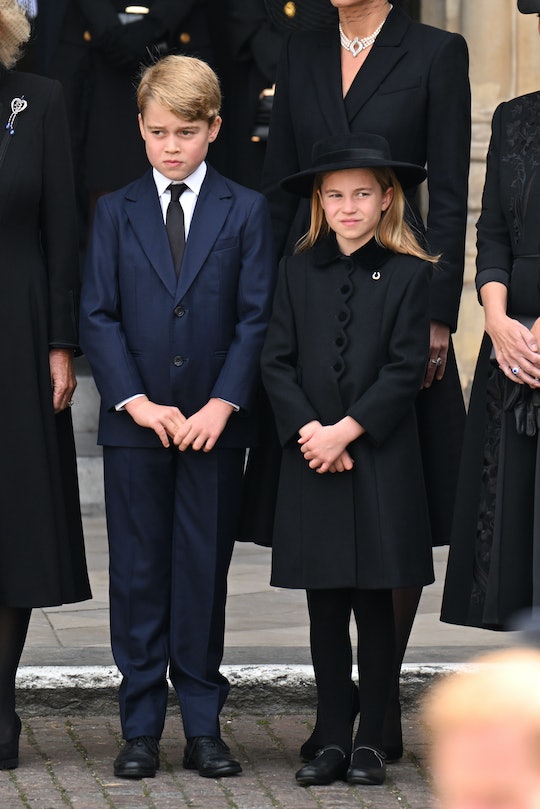 Princess Charlotte might be just 7 years old but she is already a real stickler for royal protocol. When she and 9-year-old Prince George attended the state funeral of their great-grandmother Queen Elizabeth II, she made sure her big brother, second in line to the throne and future King of England, knew what to do to properly honor their dear “Gan-Gan.” In a viral video from the ceremony on Monday, the newly styled Princess Charlotte of Wales can be seen reminding Prince George to bow.

Prince William and Kate Middleton’s two oldest children joined them in Queen Elizabeth’s funeral procession to Westminster Abbey on Sept. 19, standing with the rest of the royal family as Her Majesty passed. Which is when little Princess Charlotte, perfectly proper in a black hat and black coat dress that matched with her mom, leaned in to remind her big brother Prince George of royal protocol.

“You need to bow,” Princess Charlotte can be seen telling her brother in a viral video with a little point of her finger. For his part, Prince George simply looked down and nodded.

Princess Charlotte appears to have had a special relationship with Queen Elizabeth. The young princess made history as the first female to keep her place in the line of succession when her younger brother Prince Louis was born, meaning she is third in line to the throne as decreed by the queen. She was also seen doing her best to emulate her great-grandmother’s wave as the two stood on the balcony of Buckingham Palace at the annual Trooping the Colours and perfecting her curtsy for Her Majesty.

It seems appropriate, and truly touching, that she would want to honor her at her funeral by making sure all royal protocol was being observed. She wore a lovely little diamond brooch in the shape of a horseshoe, a gift she reportedly received from Queen Elizabeth and a reminder that the two shared a deep love of horses.

Princess Charlotte certainly did her great-grandmother proud at her Platinum Jubilee this past summer, when she made sure her brothers behaved themselves at several events throughout the weekend. Prince George would do well to keep his little sister close as an adviser. Because you know she’ll always make sure he does the right thing.