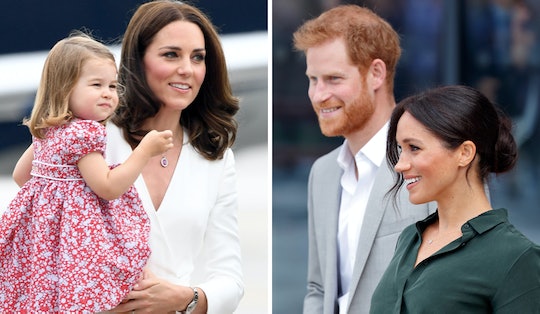 Including all those names.

#1. They’re The Only Girls In The Family

For one thing, both Princess Charlotte and Lilibet are the only daughters in their family. While Princess Charlotte is a middle child, Lilibet is the youngest in her family. So far, at least. Harry and Meghan could certainly welcome more children, although the Duke of Sussex did tell British Vogue in 2019 that they planned to have “two maximum” in an effort to reduce their environmental impact, which could mean that Lilibet will forever be a little sister and not a big sister.

Both Prince William and Prince Harry wanted to ensure that they paid tribute to their late mother Princess Diana when they named their daughters, which is especially poignant since she passed away in 1997, long before either of her granddaughters were born. Princess Charlotte has Diana as one of her middle names while Lilibet’s middle name is also Diana. “[Lilibet’s] middle name, Diana, was chosen to honor her beloved late grandmother, The Princess of Wales,” the Duke and Duchess of Sussex said in a statement announcing her birth.

Princess Diana lives on in her granddaughters.

While the world is well aware that Lilibet’s name comes from a long held nickname for Queen Elizabeth, first given to her by her own father King George VI, she’s not the only great-granddaughter to pay tribute to her great-grandmother. Princess Charlotte’s full name is Charlotte Elizabeth Diana, after both her grandmother and great-grandmother.

If Princess Charlotte and Lilibet ever decide they want to team up and celebrate their birthdays together, they’re in luck. Lilibet was born on June 4, 2021 while Princess Charlotte was born on May 2, 2015, meaning they are both warm weather babies whose birthdays land just one month apart. They could split the difference and celebrate mid-May and probably get some glorious weather.

#5. Their Place In The Line Of Succession Made History

#6. They Serve As Their Mom’s Jewelry Inspo

Both Meghan Markle and Kate Middleton have both worn gorgeous jewelry to honor their daughters in the past. In September 2020, Middleton wore a delicate necklace with her kids’ initials, including a “C” for Charlotte, of course. In August 2021, just two months after giving birth to Lilibet, Markle wore a necklace featuring her daughter’s constellation, a Gemini, along with the constellation for Taurus to honor son Archie.

#7. Their Parents Are Protective

Prince Harry has made it clear that the safety of his children is the most important thing to him. The Sussexes’ legal team recently announced that Prince Harry would like to return “home” to the United Kingdom with his family, per The Sun, but worried that it wouldn’t be safe for his children since he and Meghan had stepped away from their senior royal roles in 2020 without proper security. He’s going to make sure Lilibet is safe at all costs, just as Princess Charlotte’s father Prince William is protective of her. He and Middleton have made it clear that their children are to be protected from the paparazzi, allowing a select few photographers to be on hand when they attend major events like their first day of school.

Lilibet’s parents are known as the Duke and Duchess of Sussex, while Princess Charlotte’s parents are the Duke and Duchess of Cambridge, but they actually share the same last name. All five of Prince Charles’s grandchildren share the last name Mountbatten-Windsor, as are all of the descendants of Queen Elizabeth and Prince Philip. Queen Elizabeth’s grandfather, King George V, was the first royal to actually have a last name when he adopted the name of Windsor, based on the House of Windsor, in 1917. The queen and her husband decided they also wanted their own last name to be carried down through male heirs and unmarried female descendants; hence, Lilibet and Charlotte Mountbatten-Windsor.

The Cambridge family spends as much time as possible at their country home of Anmer Hall in Norfolk County, encouraging their kids to get outside and play in the dirt. A video of the family in honor of their parents’ 10 year anniversary saw them walking on the beach, running through the garden, and enjoying a bonfire. Much like her cousin Princess Charlotte, it seems Lilibet can probably expect much of the same at her family home in Montecito, California. Her brother Archie is busy raising his chickens at his “Chick Inn,” after all, and Meghan herself is almost always photographed outdoors; she even wrote The Bench about her favorite bench in her garden.

#10. They’re Close In Age With Their Big Brothers

Princess Charlotte and Lilibet share a similar age gap with big brothers Prince George and Archie. Prince George was born in July 2013, while Archie was born in May 2019. So basically two years between them, give or take a few months. If and when they meet someday, perhaps they can commiserate on what it means to have a brother so close in age. Certainly from Archie’s perspective, it was an adjustment for him, according to the Duchess of Sussex.

As they get older, Lilibet and Princess Charlotte will hopefully have the chance to get closer. Because there’s nothing like a cousin who really gets it.

More Like This
James Corden Reveals His Kids Have Playdates With Archie & Lilibet
Why Prince Harry Feels Lucky To Be A "Father With A Platform"
It's Official: Lilibet Will Meet Queen Elizabeth In Person For The Very First Time
Prince Harry Is A Proud Girl Dad & He’s Got The T-Shirt To Prove It