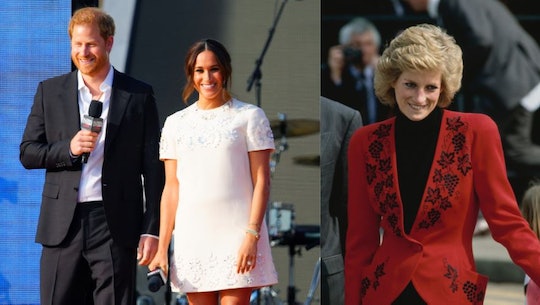 The reception is to thank donors who funded the new statue of Princess Diana.

The British royal family reunion we’ve all been hoping for has been postponed once again. Prince Harry and Meghan Markle will not be attending a private UK event that celebrates the life of Princess Diana this month.

A source told Entertainment Tonight, “There are no plans for [Harry and Meghan] to be in the U.K. for the private donor event.” The source did not state why they are not attending.

The event, scheduled for Oct. 19, will be hosted by Prince William and consist of donors who funded the statue of the late Princess of Wales, which was unveiled this past July in the Sunken Garden at Kensington Palace. Both brothers attended the statue unveiling together.

“Today, on what would have been our Mother's 60th birthday, we remember her love, strength and character — qualities that made her a force for good around the world, changing countless lives for the better,” the brothers said in a joint statement. “Every day, we wish she were still with us, and our hope is that this statue will be seen forever as a symbol of her life and her legacy.”

The private event was originally scheduled to take place at the time of the statue unveiling but it was scaled back due to COVID-19 limitations. Although the Duke and Duchess of Sussex will not be at the Oct. 19 event, other VIPs such as Sir Elton John are expected to be in attendance.

The Sussexes have not returned as a family to the UK since they’ve stepped back as senior royals last March. Last month, they traveled to New York City for several events and meetings, including Meghan reading her children’s book, The Bench, at a school in Harlem.

Harry’s relationship with his family has been strained over the past year, most recently with the aftermath of the couple’s interview with Oprah this past March.

In the meantime, the Sussexes’ attention has been on their kids, Archie, 2, and baby Lilibet. A source told Marie Claire that they are ‘extremely hands-on’ as parents.

“The Sussexes do have nannies to call on when their schedules get crazed, but they...try to keep the hired help to a minimum for the most part,” the source said. “It’s been easier for them with Lili in many ways, even though it’s twice the work, technically, because they’ve been able to use a lot of the techniques they learned with Archie and take care of things like feeding or bathing without too much fuss.”