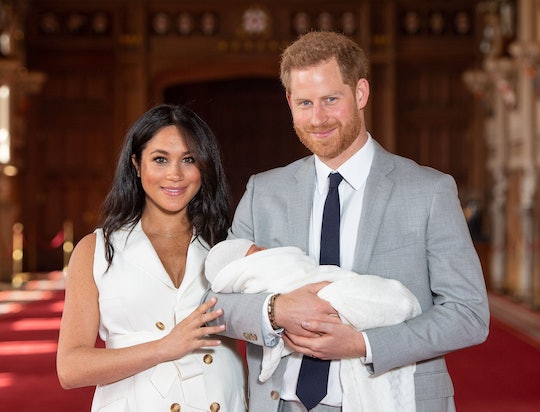 His soothing rhythm though!

Prince Harry is very private about almost all aspects of his life, but one thing he can’t hide even if he tries — his absolute adoration for his children. Ever since he became a father for the first time when wife Meghan Markle gave birth to son Archie in May 2019, Prince Harry has made it crystal clear that family is his top priority. And in a recently unearthed video from the couple’s visit to South Africa in 2019, the proud dad proved that he didn’t just talk the talk. He rocked the rock... sorry, I had to.

The previously unseen video has very few details to share, but was reportedly taken while the Duchess of Sussex spoke to members of the press during the couple’s tour of Africa in the fall of 2019. This was the same tour where the couple introduced their baby boy Archie, previously only seen in public days after his birth, to the late Archbishop Desmund Tutu.

Prince Harry can be seen in the background rocking his baby boy, ostensibly to calm him or soothe him, and looking for all the world like the most relaxed dad on the face of the earth. The video was shared with the message, “The cutest video on the internet. Prince Harry rocking a baby archie.”

The video might have been taken from a distance, but it was a direct hit to the hearts of many social media users who wrote messages like, “You can feel the profound happiness. Haz finally getting the life he craved, the life he deserve,” and “Adorable even from a distance.”

Certainly Prince Harry does seem to love every aspect of being a dad. Especially now that he has two children including 7-month-old baby girl Lilibet “Lili” Diana. He recently opened up to pal Serena Williams about how he finds balance in his routine with his kids, “I’ve now put in about half an hour, 45 minutes in the morning when it’s like, ‘OK, one of the kids has gone to school, the other one’s taking a nap. There’s a break in our programs. I either… work out, take the dog for a walk, get out in nature, maybe meditate.”

Since stepping away from his senior royal role in 2020, Prince Harry has been spending even more time with his son. Playing on the swings, hanging out at “Archie’s Chick Inn,”eating fresh waffles from Queen Elizabeth’s waffle iron.

He’s living that dad life and loving every minute of it.