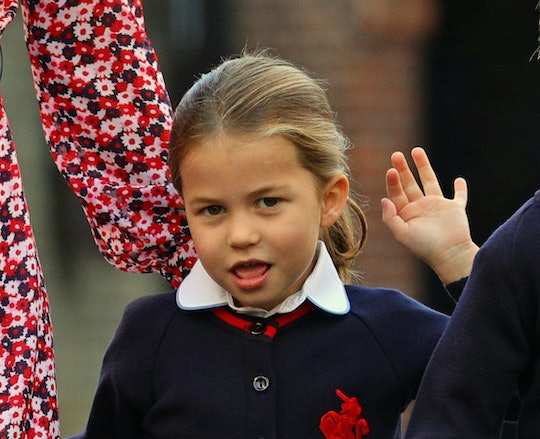 Just a dad and his daughter doing their thing.

Sometimes a royal dad just wants to have some special time with his little “Mignotte.” It doesn’t hurt if they’re heading out to eat one of his favorite foods either, apparently. Prince William joined his 6-year-old daughter Princess Charlotte for a pizza party, because he’s just a regular dad doing the weekend birthday party rounds with his kid.

The Duke of Cambridge was reportedly seen at a child’s birthday party at Il Pagliaccio in London alongside his daughter on Saturday. According to the Daily Mail, the birthday party was for a friend of Princess Charlotte’s from her school, Thomas’s Battersea. Princess Charlotte was seen walking to the restaurant with her dad carrying a large birthday present, and now I can’t help wondering what kind of presents the royal family would even give for a kid’s birthday party. Prince William, who also shares 8-year-old Prince George and 3-year-old Prince Louis with wife Kate Middleton, reportedly wore jeans and a sweater to drop off his daughter at the birthday party and returned a while later to pick her up. No word on whether or not he helped himself to a slice of pizza, but if research tells us anything, all signs point to absolutely he ate some pizza.

He does have a habit of eating pizza on the sofa, which Middleton has called a “nightmare,” so perhaps he took the opportunity to eat pizza away from the sofa. Like a little reward for doing the birthday party rounds. If not, perhaps Princess Charlotte and her brothers can make some of their homemade pizza like their mom taught them to do. Although that’s another messy option to be fair.

It’s nice to know Princess Charlotte is getting some alone time with her dad these days. Certainly the young princess has enjoyed a few solo outings with her mom to the ballet and her parents have taken both her and big brother Prince George to football games. But it’s always such a special moment for a kid with siblings to get one on one time with their parent. Prince George has had several in recent months, going to the World Cup with his parents and most recently a rugby game as well.

Princess Charlotte’s outing with her dad sounds like it was super laidback. Yes, there were apparently bodyguards at the birthday party but otherwise, it sounds like just a nice Saturday afternoon. A pizza party with the future king; sounds pretty great, right?

More Like This
Kate Middleton Explains Why Her Kids Couldn't Attend The Top Gun: Maverick Premiere
Meghan & Harry Celebrated Their Anniversary As A Family Of Four For The First Time
Why Prince Harry Feels Lucky To Be A "Father With A Platform"
Prince Harry & Meghan Markle Could Take Us Inside Their Home For A New Docuseries