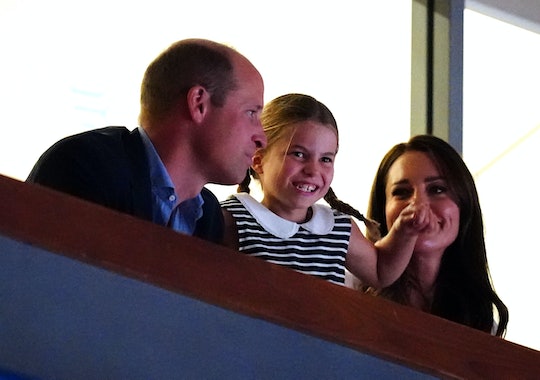 If you had to hazard a guess as to what Princess Charlotte’s favorite sport might be, you might think soccer. Or football if you’re in the United Kingdom. She and dad Prince William recently posted a rare video together when they wanted to wish the English women’s football team the best of luck. And Prince William told the Lionesses that his daughter is a budding soccer star, letting them know she is “really good at goal.” But if you guessed soccer or even football, you would be wrong. This girl is all about gymnastics.

Princess Charlotte recently joined her parents for her first solo royal outing at the Commonwealth Games, and Sports Aid chief executive Tim Lawler asked her during her visit what her favorite sport might be. “She really, really loved seeing the swimming,” Lawler told Hello! “But she's interested in the gymnastics, and while they're trying lots of different sports at home, I understand, when I asked her about sport she answered very easily and said, 'It's gymnastics that I like.’”

Mom Kate Middleton backed up her claim. “Charlotte spends most of her time upside-down, doing handstands and cartwheels,” she said, per The Daily Mail.

Princess Charlotte’s enthusiasm for gymnastics was on full display during the artistic gymnastics competition at Arena Birmingham on Tuesday. She sat between her parents looking excited with a big grin on her face, while both Prince William and Middleton watched her with a look of absolute pride.

The 7-year-old has a long list of interests that seem to line up with her love of movement. Prince William admitted that his daughter had perfected the floss back in 2020, and she famously likes to dance around the kitchen at breakfast in a tutu, shaking it to Shakira. Princess Charlotte also has a flair for the dramatic, apparently, and likes to try her hand at acting. Which aligns beautifully with the showmanship of gymnastics.