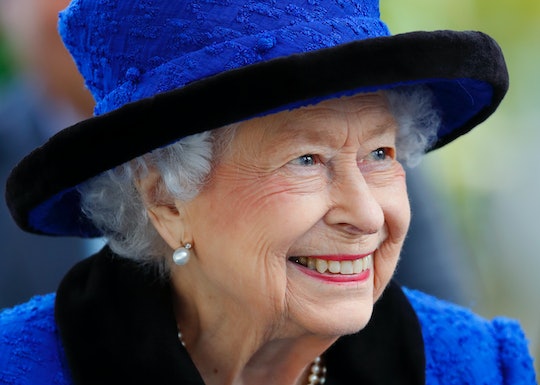 The precious photo on display in her office.

Queen Elizabeth is one lucky woman. First, she gets to be a queen with tiaras and such. Second and maybe better, she has a whole bunch of sweet great-grandchildren to cuddle — as evidenced by a recent photo that’s on display in her Buckingham Palace office. The photo, though blurry and slightly hidden by her purse, shows Her Majesty sitting with her late husband Prince Philip on the sofa, surrounded by smiling great-grandchildren. And even in a blurry photo, you can see just how happy she truly is to be with those little sweethearts.

On Wednesday, Queen Elizabeth was at Windsor Castle on official duty, presenting concert organist Thomas Trotter with the Queen’s Medal for Music. Naturally, royal watchers took the opportunity to have a glimpse around in the background when photos of the presentation were shared, and they hit the jackpot: a photo on the queen’s desk, where she can be seen cuddling a baby Princess Charlotte. Beside her in the photo, Zara Tindall’s oldest daughter Mia can be seen with a big grin on her face. While on her other side, Prince Philip sits with their great-grandchildren Isla and Savannah Phillips, daughters of Peter Phillips and granddaughters to Princess Anne. And standing behind the great group of smiling family is a sweet little Prince George, looking splendid in one of his signature cardigan and collared-shirt combinations.

This photo feels particularly poignant now, with Queen Elizabeth preparing to spend her first Christmas without her beloved husband. Prince Philip passed away at the age of 99 in April, leaving four children, eight grandchildren, and 11 great-grandchildren behind. This photo looks to have been taken around 2015, after the birth of Princess Charlotte in May of that year but before the arrival of several great-grandchildren who came after. That includes 3-year-old Prince Louis, youngest son of the Duke and Duchess of Cambridge, and Prince Harry’s two children with wife Meghan Markle, 2-year-old Archie and 6-month-old Lilibet “Lili” Diana.

Queen Elizabeth will hopefully have the chance for new photos with more great-grandchildren this year over the holidays, but sadly it won’t be with her husband by her side.

That’s the difficult part of living a long life. The good part is extra snuggles with more and more great-grandchildren with every passing year.